How to correctly calculate the fractal dimension of a finite set of points?

The box-counting dimension is defined by:

What works well if you are solving algebraically or if you can recursively generate more points, as in the case of a fractal.

If you are working with a finite set of points and you make $\epsilon$ go to zero, your graph of $\log (N)$ vs $\log (1/\epsilon)$ will have slope zero and you have a set of fractal dimension zero. See an example in the image. 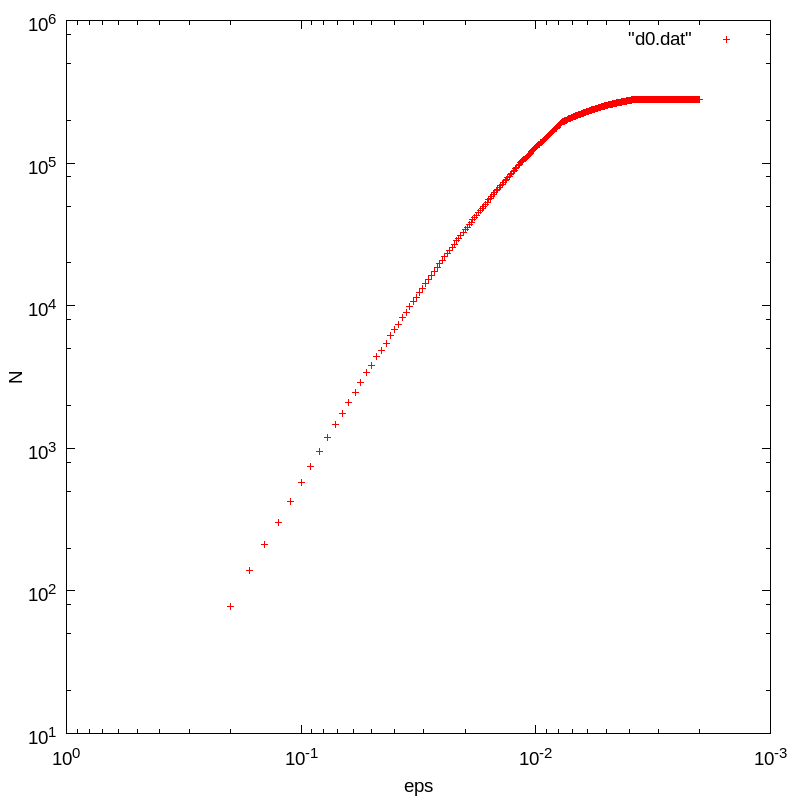 I think that by definition any finite set of points has dimension equals zero. However I can't use that definition in my work. And I see a lot of works that do not use it.

I do not know how most people deal in this scenario.

There are some ideal range for varying the $\epsilon$?

Should I use another algorithm?

I tried to find something about that in the Ken Falconer's "Fractal Geometry Mathematical Foundations and Applications", but I did not understand much.

I also want to know why people ignore that a finite set of points has dimension equals to zero. In the mentioned article this is clearly ignored.

Another example: when making a fractal on a computer, is need only generate the vertices. And then calculates the dimension using the box-counting. The vertices are a finite set of points, but people ignore that.

For a finite set, $N(\epsilon)$ is eventually constant, equal to the number of points in the set, and so the box-counting dimension is zero:

This is an issue that addresses the differences between mathematics and physics. A mathematically defined fractal is infinite and has infinitely many points and levels. If you study a real fractal in nature there is always a finite number of elements.

Consider a tree, we can agree that it is a fractal, no?, but it's branches are composed of molecules, and those are composed of atoms, and inside an atom the electrons and the nuclei are only a portion of the space, most of it is empty space, so if you would go infinitely small then you would get a fractal dimension of 0, no matter what object you measure.

With your set of points is the same, but at a different granularity level. It is of course a crude approximation of a fractal, and you may want to raise awareness about this fact.

Also, to improve the measurement, do not think of them as points but as circles or squares that occupy a small area, that way when you decrease the size of your lattice, the slope in the number of boxes won't go down to 0.