Simple proof of the structure theorems for finite abelian groups

Many proofs of the structure theorems for finite abelian groups first reduce to the problem to $p$-groups, which is fine and is an important technique.

However, it seems to me that a simple proof can be based on this one crucial result:

Every finite abelian group has a cyclic direct factor. $\qquad(\star)$

From this, it follows at once by induction on the order of the group that

Every finite abelian group is a direct product of cyclic groups.

The Chinese remainder theorem then allows us to split these cyclic groups into cyclic $p$-groups and so we get the primary decomposition theorem:

Every finite abelian group is a direct product of cyclic $p$-groups.

The Chinese remainder theorem then allows us to reassemble these into an invariant factor decomposition.

Note that the proof is really easy once we have the crucial result $\star$ (and the Chinese remainder theorem of course).

I think Mac Lane and Birkoff in their Algebra do something along this line but it is not very simple.

Does anyone know a proof of the structure theorems along the lines above?

In particular, is there a simple proof of the crucial result $\star$ ?

(A side bonus would be a simple characterization of the cyclic subgroups that are direct factors of a given finite abelian group: I expect they are exactly the maximal cyclic subgroups.)

Rotman's Introduction to the Theory of Groups (theorem 6.9 on page 130) contains such a proof, attributed to Schenkman, but this proof is not exactly as I have outlined in the question. 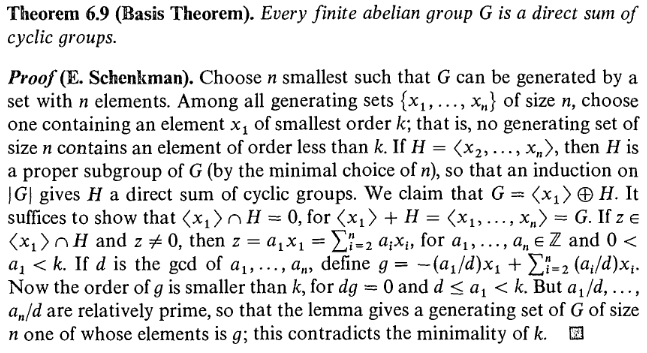 The book The Theory of Finite Groups: An Introduction, by Kurzweil and Stellmacher, does what I had in mind in Chapter 2.

For finite abelian $p$-groups you can do the following to split off a maximal cyclic subgroup as a direct summand.

Not the answer you're looking for? Browse other questions tagged group-theory finite-groups abelian-groups or ask your own question.

6
Proof of Fundamental Theorem of Finite Abelian Groups
3
Order of a Group Based on Their Exponents
3
Isomorphism between Direct Products of Cyclic Groups
0
Does anyone know a simple proof for the fundamental theorem of finitely generated abelian group?
0
if o(a) is equal to exponent of finite abelian group G then $G=<a>\times K$