Off the top of my head, I can't think of a non-separable compact space.

Can you provide a good example?

$\pi$-Base, an online version of the reference chart from Steen and Seebach's Counterexamples in Topology, gives the following examples of compact, non-separable spaces. You can view the search result for more details on these spaces.

Lexicographic Ordering on the Unit Square

A not so simple, but curious example is the Alexandroff Double Circle: 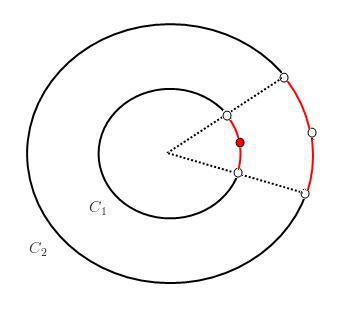 This way we form a basis for a topology on $X$. $X$ provided with this topology is what we call the Alexandroff Double Circle.

I don't know if this space is useful some some other things besides counterexamples. This and a lot of other crazy spaces can be found on "Counterexamples in topology", by L. A. Steen and J. A. Seebach.

The space I described is $\text{T}_0$ but not $\text{T}_1$. @Léo 's answer gives an example of a compact Hausdorff space that is not separable.

Edit: As pointed out in the comment of @Henno Brendsma, I should not have used convergence of sequences since that carries an additional assumption that each point has a countable neighborhood basis. Instead one can just use convergence of nets. The cardinality of all nets in a countable subset $A$ is bounded, so the cardinality of the set of limits of convergent nets in $A$ is bounded, and every point in the closure of $A$ is the limit of a convergent net in $A$.

Based on this question I asked recently, the one-point compactification of a non-separable metric space.

I specifically asked about the space of cadlag real-valued functions on $[0,1]$ under the supremum metric, but there are lots of other non-separable metric spaces out there, and other compactifications where the same argument applies.

Not the answer you're looking for? Browse other questions tagged general-topology compactness examples-counterexamples separable-spaces or ask your own question.

2
A one-point compactification of a non-separable metric space: separable or not?