I need a quick way to determine whether a number is prime by hand. Any suggestions?

There's no super-fast way to determine if an arbitrary number is prime by hand. However, you can often quickly determine when a number isn't prime, which is often good enough, especially if you are only dealing with smallish numbers, as you often are in math competitions.

Those two rules knock about nearly 75% of numbers.

There is also a simple test for multiples of 11 - starting from the units place, add the first digit, subtract the next digit, add the next one and so on. If you end up with a negative number, treat it as positive. If the result is a multiple of 11, so is the original number.

Edit: Just for fun, here's a graph of how many false positives there are for a given upper bound. This chart shows that with four rules and a list of 13 exceptions, you can correctly find whether any number under 500 is prime or not in... probably 20-30 seconds? 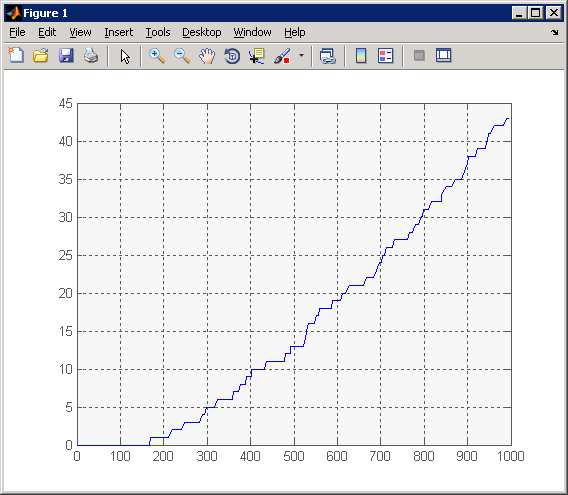 To determine if $n$ is prime:

edit: if you are doing it by hand read this one www-math.mit.edu/phase2/UJM/vol1/DORSEY-F.PDF

You can try running some probabilistic primality tests such as: https://en.wikipedia.org/wiki/Fermat_primality_test

or read this for some more info on primality tests
www-math.mit.edu/phase2/UJM/vol1/DORSEY-F.PDF
or this one on using elliptic curves
groups.csail.mit.edu/cis/pubs/shafi/1999-jacm.pdf

Not the answer you're looking for? Browse other questions tagged prime-numbers or ask your own question.