What is the mathematical significance of Penrose tiles?

I have a very limited understanding of groups and symmetry gained mostly from online videos (for eg. this one), so forgive me if this sounds ignorant.

In general I am curious as to what the significance of Penrose tiles is. They're beautiful and intriguing at face value, high structure and order mixed with chaos and so on, but what is the real mathematical significance?

So, you can literally write a book about this stuff (exhibit a) and so I will try my best to keep it short and sweet (as much as possible at least). I'll also not mention anything about the physical interpretation of aperiodic patterns and tilings which mathematical and solid state physicists are interested in - namely quasicrystals.

You mentioned that periodic tilings can be characterised by a group action of the space that they tile under which the tiling is invariant - let's stick to euclidean $2$-space, $\mathbb{R}^2$ for this post. You can do this in a few ways, you could either look at just the subgroup of the translation group on $\mathbb{R}^2$ under which the tiling $\mathcal{T}$ is invariant, in which case a cocompact periodic tiling has invariant subgroup isomorphic to $\mathbb{Z}^2$, or you can consider the subgroup of the full euclidean group on $\mathbb{R}^2$ under which $\mathcal{T}$ is invariant, including rotations - this is more subtle and will depend on the specific tiling but we understand this case very well too.

The Tiling Space of $\mathcal{T}$

Now, let's also consider the dual topological theory to this setup. Whenever we have a group $G$ acting on a manifold $M$, we can consider the quotient space $M/G$ and so in the case of the translation invariant subgroup for a periodic tiling, we have the space $\mathbb{R}^2/\mathbb{Z}^2$ which is a $2$-torus $T=S^1\times S^1$ (in general, for $n$-dimensional periodic tilings we get the $n$-torus $(S^1)^n$). We'll call this space the tiling space of our tiling $\mathcal{T}$ and denote it by $\Omega_{\mathcal{T}}$ for an arbitrary tiling.

If we want to consider rotations as well, we need to be slightly more clever so that we don't lose too much information and instead consider the orbifold (stacky) quotient of the symmetry group. I won't spend any more time on the rotational version as it can get messy fairly quickly and would require its own new question in my opinion.

Now, how can we view the torus $T$ as an object which gives us information about our tiling? Well it's quite simple really; a point in the torus corresponds to a placement of the origin of $\mathbb{R}^2$ somewhere into our tiling. That is, if we choose some periodic tiling $\mathcal{T}$, including a prescribed origin, then if we move along one of the group elements in $G$ we should end up back to where we started and so locally, no matter how far away from the origin you look, everything about the tiling looks the same. We've effectively placed a metric on the set of all tilings of the plane by those tiles in $\mathcal{T}$ which says "if a translation by a vector $x$ can get me from the tiling $\mathcal{T}$ to the tiling $\mathcal{T}'$ then we say $d(\mathcal{T},\mathcal{T}')=|x|$, unless of course there is a vector of shorter length. So really we should say $$d(\mathcal{T},\mathcal{T}')=\inf\{|x|:\mathcal{T}+x=\mathcal{T}\}$$ and in fact this gives a well defined metric on the set of all tilings of the plane which contain only those tiles appearing in $\mathcal{T}$ and moreover this space is, by construction, homeomorphic to the tiling space $\Omega_\mathcal{T}$. This can therefore be taken as our definition of the tiling space.

What if $\mathcal{T}$ is aperiodic?

Well, this is the question you originally asked and it is a good question - it's the reason we spent so long defining the tiling space in terms of effectively local information of the tiling - remember for a periodic tiling the origin only needs to know whereabouts in a tile it is in order to determine what point that tiling represents in the tiling space. We're now set up to handle aperiodic tilings with only a small modification of the above metric.

Now, from the motivating material before, we want to put some metric on $\Omega_{\mathcal{T}}$ which in some way satisfies our notion of two tilings being close if they look very similar to each other around the origin out to a large radius. I'll put the metric here but note that it's not pretty - there are equivalent ways to define this metric and you can even forgo defining the metric altogether and just define the topology but none of them are particularly pretty - instead, just try to keep the intuition that two tilings are close if, after a little wiggle, they overlap each other around the origin on some very large patch of tiles. For tilings $\mathcal{T}',\mathcal{T}''\in\Omega_{\mathcal{T}}$ we define the tiling metric $d\colon\Omega_\mathcal{T}\times\Omega_\mathcal{T}\to\mathbb{R}$ by

Most of the hard work is done now. We have our tiling space $\Omega_\mathcal{T}$ and it seems to represent our intuition of what it means for two tilings to be similar to a 'high degree of accuracy' - there are hundreds of papers by the way on trying to understand the topology of these spaces - they are extremely complicated spaces. For aperiodic tilings which are locally finite (so there are only finitely many patches of tiles of a given radius appearing in $\mathcal{T}$) they are connected but not path connected spaces. They are also compact.

They are a bit like a solenoid as shown below, except they are not homogeneous spaces. Given a regularity condition known as repetitivity which I won't write here (a Penrose tiling is both locally finite and reptitive) a tiling whose tiles are polygons meeting edge to edge has a tiling space which fibers over the $2$-torus $T$ with fiber homeomorphic to a Cantor set. You can think of moving around the torus as translating the tiling by small amounts, and then hopping a small discrete distance from one point in the Cantor fiber to another corresponds to making a different choice of placing a tile far away from the origin, but everything else closer in than that tile is the same. 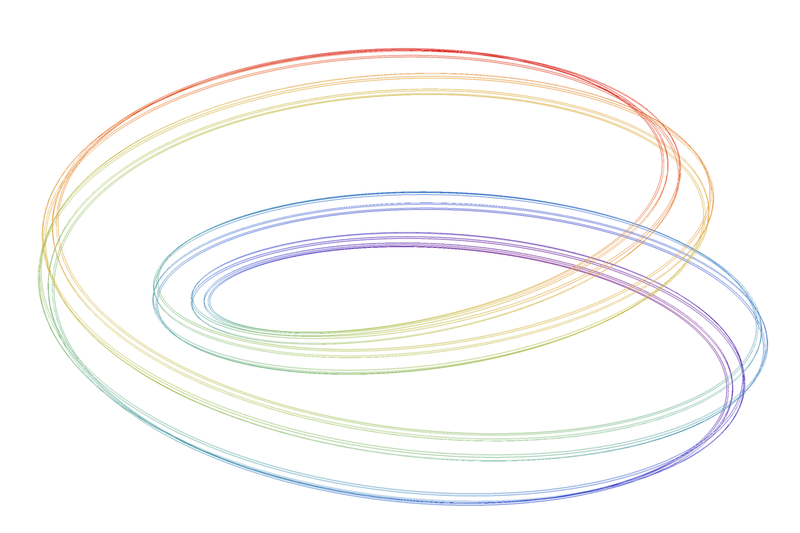 What about the algebra?

I will leave this section fairly vague as this post is already getting very long. As the astute reader may have guessed, our usual bag of tricks for studying these spaces won't really work - we have an uncountable collection of disjoint path connected components, each component of which is weakly contractible, so singular (co)homology and homotopy groups are all pretty useless in this setting. What we need is an invariant which can somehow see the connected components as opposed to the path connected components - for reasons I won't go in to, it turns out that the right tool is Čech cohomology.

There are a few other invariants we can associate to tiling spaces including its $K$-theory, the tiling groupoid, the $\lim^1$ invariant, various notions of dynamical equivalence and shape equivalence. For the reader who wishes to read more of what has been outlined here, I recommend the book by Lorenzo Sadun$^{[1]}$ linked above, and the seminal article of Anderson and Putnam (1998).$^{[2]}$

Not the answer you're looking for? Browse other questions tagged group-theory geometry symmetric-groups tiling or ask your own question.