How do I tell whether axiom of choice is used or not?

I am having a hard time understanding the Axiom of Choice(AC).

Then, does the difficulty of defining a "choice function" come from the fact that

(a) elements of each set $V_\alpha$ in the collection might not be "ordered" (in some sense) so that whoever is constructing a choice function is not sure which element to choose from each set?

(b) the collection might be uncountably infinite so that there seems to be no systematic way to go through each set (without missing one) in the collection?

As an illustration of my confusion with AC, please consider the following examples.

(1) If I want to prove that the square of a real number is always non-negative, then I would begin my proof by saying that "Pick any real number $x$." Here, am I using AC? I am "choosing" an element from the set of real numbers $R$, but I am not specifying "how" so I feel that I am using AC. On the other hand, however, since I only have one set $R$, it seems intuitively obvious that I can just "grab" any element from the set without a problem.

(2) Here is the proof by Rudin of the theorem that monotonic functions have at most countable discontinuities. 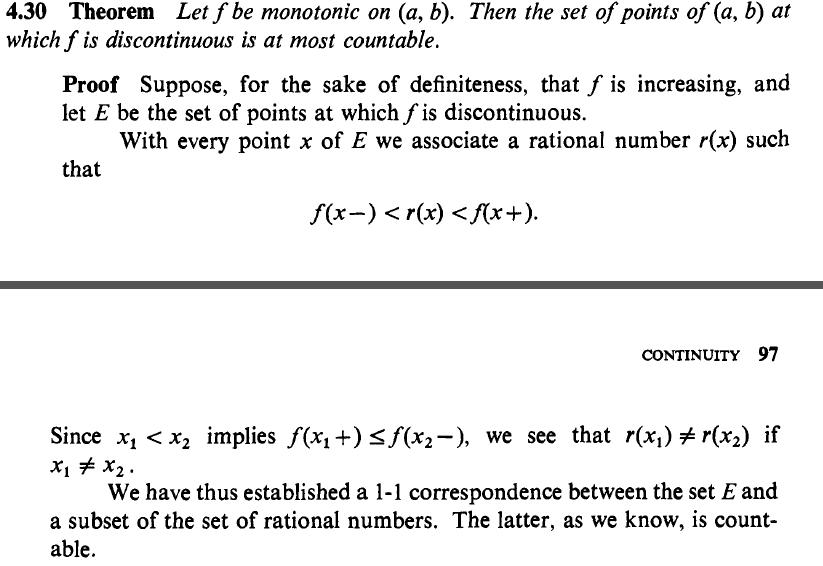 I am sorry if my questions are a bit all over the place, but I would appreciate it very much if you could help me understand AC!

First of the bat, using $V_\alpha$ is extremely bad notation. These sets have a very special meaning in set theory, and they are "the building blocks of the universe of sets". But let me gloss over this issue now, as it's unimportant for the rest of your question.

Choosing one element does not invoke the axiom of choice. Instead it invokes the rules of first-order logic. We can prove that "there exists a real number" therefore we can instantiate this existential quantifier and actually "pick" a real number. We choose one real number, so it's fine.

But in general, choosing from infinitely many different sets can be proved as an impossible task without the axiom of choice. Sometimes, not always. If there is a way to give some structure to all the sets at once, in such way that we can choose from each set, then we don't need the axiom of choice. For example if all the sets are sets of positive integers, then we can choose the least in each set.

On the other hand, if you are told that these are arbitrary sets, then you can't do that. In fact, even if you're told that each of the sets is finite, or god forbid, consists of two points, you still can't make a canonical choice, because you first have to choose how to endow each set with a structure. Only if you can endow all the sets at the same time with some structure, then you can make a choice without invoking the axiom.

Your confusion is understandable, but the "axiom of single (or finite) choice" is none. It is rather a consequence of the rules of inference (Existential Elimination) we hold valid for the existential quantifier: $$ \begin{align}\exists \alpha\colon\phi(\alpha)\\\underline{\phi(\beta/\alpha)\vdash\psi}\\\psi\end{align}$$ If you have $\exists x\colon \phi(x)$ the it is valid to pick "some" $x$ such that $\phi(x)$ and keep on proving things, and finally you have that there exists $x$ such that whatever you have shown. This can be repeated for finitely many choices, but not more (as that would require infinitely many proof steps, or even an infitely long premise $\exists x_1\exists x_2\exists x_3\ldots$). This is maybe comparabele that we can join finitely many true statements by and ($\phi_1,\phi_2,\ldots,\phi_n\vdash \phi_1\land\phi_2\land\ldots\land\phi_n$) because the rules of inference allow this for the basic case of two statements, but this is not allowed for an "infinite and", the allquantor.

And yet the Axiom of Choice comes in several shades that indeed have different strength (i.e. there are theorems that can be proven only with the stronger versions), e.g. Axiom of Countable choice (for countable index sets) or the Axiom of Dependent Choice. So in this sense only part of the problematic of choice comes from the fact that the index set might be larger than $\mathbb N$. The main problem really (even in the countable index case) is that the individual $V_\alpha$ in general do not allow to pick a canonical element (such as the smallest one or the unique one with a specific property, anything we could write donw explicitly as an algorithm really).

I think that the guiding principle is that if you can write a finite specification for what you want to choose then you don't need to rely on AC. To pick a real number, you write a specification

If you want to pick elements from a finite collection of infinite sets you can compose a finite number of clauses to do so.

Otherwise, you can rely on AC to say that a set can be formed comprising one element from each set in a (infinite) collection.

For the first part, I think that the difficulty comes from the order. Whether the set is finite or infinite doesn't really matter so long as you have established an ordering. You can have a partial order (poset) or a strict order (i.e. trichotomy).

I think the cardinality of the set matters only insofar as the number of possible orderings (i.e. permutations of the elements) you can come up with for any given set.

The book "Tools of the Trade" by Paul Sally has an excellent discussion on the AC and once I have more time, I will edit this to reproduce what he is saying.

Not the answer you're looking for? Browse other questions tagged analysis set-theory axiom-of-choice or ask your own question.