It is known that there are five Platonic solids: 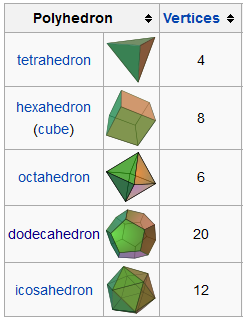 If, lets say, there are 4 particles with the same electricity charge and whose movement is constrained to be on a sphere, resulting forces will eventually move particles to form a tetrahedron.

I have two questions here:

1) If number of particles are 8, 6, 20, and 12, would resulting solid (in similar experiment) be hexahedron, octahedron, dodecahedron, and icosahedron, respectively?

2) What would happen if number of particles is not 4, 8, 6, 20, or 12? Would an equilibrium be reached ever? Would the equilibrium shape be unique or not? Are those solids (resulting from such experiments) widely known? What would be their other properties?

I attempted some simulations, and researche the internet but didn't reach any sound conclusion.

This is known as the Thomson problem. For $4$, $6$, and $12$ particles, the minimum energy configuration is the corresponding Platonic solid, but not for $8$ or $20$ particles. In particular, for $8$ particles a square antiprism has lower energy than a cube. Minimum energy configurations of course exist for other $n$, but finding them is a difficult numerical problem; as with most packing problems, there appears to be no general pattern for large $n$.

Not the answer you're looking for? Browse other questions tagged geometry optimization physics solid-geometry platonic-solids or ask your own question.

2
Optimal distribution of points over the surface of a sphere