What does the derivative of area with respect to length signify?

I do understand what it means to differentiate, graphically, it gives you the slope of the tangent at a point on the graph. But now, when I think of what differentiating means in the context of Area and length, it doesn't make any sense to me at all. What does $2L$ signify?

Now the derivative is in quite simpified terms "the difference of value of the function over the change of argument", so basically when you increase the side length by $\Delta L$, then the surface increases by $2L\Delta L$ and a negligeble term $(\Delta L)^2 $.

One can also say that $2L$ signifies the permeter of the part of the square that got inflated. 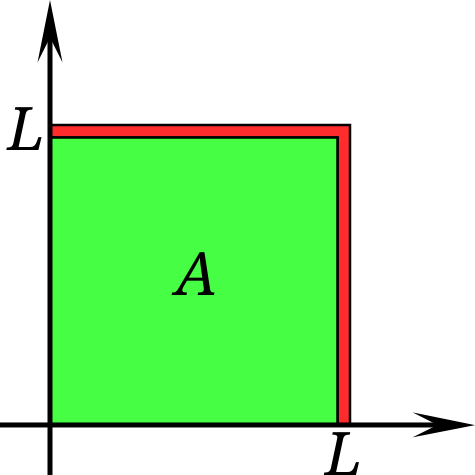 Here, the green square is the square of area $A=L^2$ and red line is its increase.

When you increase the length $L$ by $dL$, the area $A$ gets increased by $2LdL$. So, to answer your question, significance of $2L$ is that it is the length of the red line on the picture ($dL$ is its width).

That's an easy example because the rate of travel is constant. Calculus was invented to handle situations where the rate is itself changing. For example, if you start from a red light and accelerate up to the legal speed limit of 30 miles per hour then your speed is changing. The derivative of the speed is the rate at which you're speeding up - the acceleration. You might measure that in (miles per hour) per second.

You can describe the derivative of a graph of the function y = f(x) the same way. Here the height y changes as the value of x changes. The steeper the graph (at any particular point) the larger the change in y for any particular small change in x. The rate at which y changes is the derivative. You have to think only about small changes in x since the graph is a curve, whose steepness varies from place to place. As long as the change in x is small, the curve nearly matches the tangent, whose slope is just the rate of change you care about. (It's taken mathematicians centuries of work to make precise sense of the idea expressed roughly as "if you change x by just an infinitesimal amount then the curve and the tangent are the same".)

Now think about the question you asked. The area of a square depends on the length of its side. The derivative measures the rate at which the area changes when the side changes, measured in units like (square centimeters of area) per (centimeter of side). @TZakrevskiy 's answer above explains why that's just twice the side length. Here's an analogous question: explain why when you grow a circle of radius r the area changes at the rate 2 pi r.

I wish there were more time and more incentive to spend time in calculus classes on these ideas, rather than rushing to the rules and formulas for derivatives (and integrals).

Not the answer you're looking for? Browse other questions tagged calculus derivatives or ask your own question.

69
Why can't the second fundamental theorem of calculus be proved in just two lines?
0
Can you deduce the power rule of differentiation just by logic?

4
A doubt over a differentiation problem.
10
Integration being the opposite of differentiation?
0
The meaning of differentiation of $x$ with respect to $y$
1
How Square tin with side “6a” units after bending have length of a side of the square is “a” units?
0
Will the last derivative of every differentiable function be a constant?
1
Confusion about functions and what variables they're functions of
3
Can the tangent line be defined independently of the derivative?