Why does substitution work in antiderivatives?

I'm not entirely sure what I want to ask here, so please bear with me!

Maybe someone can explain this better than my high school teacher? Is there a 'formal' explanation for this? Thank you a lot!

There was a deliberately unfortunate choice of variable when I wrote "an antiderivative $F(x)$ of $f(x)$." The $x$ here is playing a different role than the $x$ in the original integration question. It would have been better to choose a letter different than $x$, say $u$ for the sake of tradition, or $w$, or $z$, and then to write that we want to find an antiderivative $F(u)$ of $f(u)$. Then our integral is $F(g(x))+C$.

As a shortcut to the shortcut, imagine like before that $u$ is a symbol, but at the same time it is, mysteriously, $g(x)$. Then the substitution step of the previous paragraph is unnecessary, and we simply get $$\int f(g(x)) g'(x)\;dx =\int f(u)\,du.$$

How can $u$ be treated as a variable for the sake of the formal manipulation by which we find $\int f(u)\;du$, and simultaneously as the function $g(x)$? One might, as you do, legitimately wonder about this. One point to be made in favour of it is that the above argument proves that the procedure will always give the right answer.

In the integration by substitution process, instead of saying that we will find an antiderivative of $f(u)$ and then substitute $g(x)$ for $u$, we write instead at the beginning "Let $u=g(x)$," then find $\int f(u)\;du$. But it all amounts to the same thing.

Comment: The following general idea is useful. Differentiation is ordinarily easy, integration not so much. If after some work one has calculated an indefinite integral, one can quickly check whether the answer is right, by differentiating. This can save us from errors both major and minor. As a simple example, suppose we want $\int e^{-3x}\,dx$. I will write down a wrong answer, $3e^{-3x}+C$. Let's check whether this is right. Differentiate, using the Chain Rule. We get $-9e^{-3x}$. Oops, wrong answer! But we can see how to fix our wrong answer, by dividing that answer by $-9$.

What you are looking for is an intuitive interpretation of the formula for integration by substitution. I will try to provide it in rather simple words. Consider the example $\displaystyle F(x)=\int 2xe^{x^2}\, dx $.

Actually, the difference between the function in terms of $x$ and the substituted (but invalid) one in terms of $u$ is as follows: 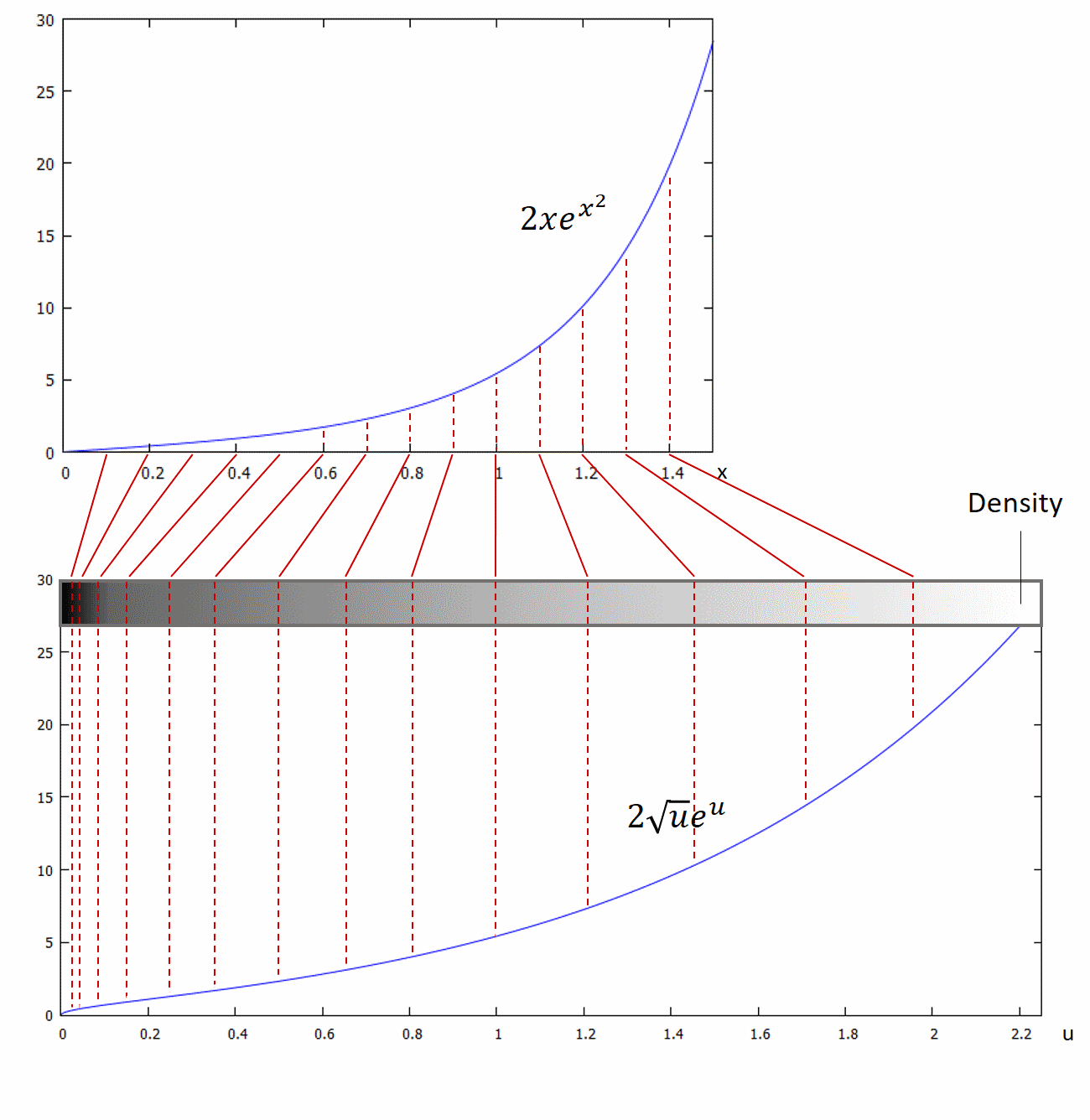 It can be seen from the plot that the areas under the curves differ a lot and, hence, the antiderivatives will differ as well. If $x$ moves $\Delta x$ then $u$ will move $\Delta u$ where for most corresponding intervals $\Delta x<>\Delta u$. In the plot, the density reflects this fact: For example, some intervals of the function on the top map to smaller intervals on the substituted function indicating "a higher density". Let's think of the density as $ \Delta x/ \Delta u$.

I also struggled with this topic when I was younger and hope that the explanation helps a lot of people. You might also want to have a look into the full article on Insight Things.

The «substitution rule» works precisely because the chain rule is true for derivatives.

Lets say you know that $F$ is an antiderivative of $f$.

Well, the substitution rule sais that $F(g(t))$ is the answer. Why? Simply because of the chain rule:

Not the answer you're looking for? Browse other questions tagged calculus integration or ask your own question.

4
Why does substitution work in integrals
14
Differential equations: how does separation of variables really work?
2
Why don't we use "dx" as the limiting variable when teaching the definition of the derivative with respect to x?
30
Why isn't $\int \frac{1}{x}~dx = \frac{x^0}{0}$?
4
Explanation of spectral theorem for reals to high schoolers who have only done computational single-variable calculus.
3
Do people agree on what dx is in Riemann integration?
1
Can anyone explain to me please why is this solution to this integral is wrong?