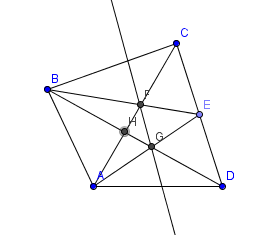 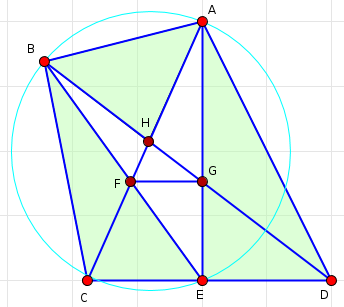 Your figure is only defined up to area-preserving affine transformations. Here is one possible set of coordinates, computed from your conditions using resultants:

You can verify that all required collinearities and areas are satisfied by these. Except for the fact that you were inconsistent in the order in which you specified the triangles for the area requirements, but I don't think that this should imply a negative sign here.

find the area of $\triangle ABE$

You can compute that yourself, from the coordinates above. To check: it's approximately $4.9$.

This is generally not the case, and in fact also not the case for the above coordinates either as you can easily see. Which makes sense, since as I said before, the whole configuration is only defined up to an area-preserving affine transformation, and those don't preserve circles.

So how did I find these coordinates? I started by assigning variables to most coordinates for $A,B,C,D$. I decided to have $C_y=D_y=E_y=0$, so that that line became the $x$ axis. I also decided to put $E$ in the origin. I computed coordinates for $F,G,H$ in terms of these variables. Then I used those to express your conditions. The condition of $CD\Vert FG$ and the three area requirements got turned into these equations, in order:

I computed resultants of these to eliminate some variables, and found that I could still choose $A$ arbitrarily. I did so, not with the coordinates above at first, but I later adjusted the coordinates to get a nice picture and simple coordinates. So choosing $A$ as above, I got a final resultant which would factor like this:

$B_y=0$ would have $B$ collinear with $C,D,E$ which is surely very degenerate. So it is the last factor which describes the situation we are interested in.

There are actually two solutions, the one above and the one obtained by changing the sign of every occurrence of $-\sqrt{15}$. But that solution would have $B_x>A_x$, would have $F$ and $G$ outside their line segments, and in general would look pretty ugly. I decided that this was not the intended solution, and made a picture of the other one.

I am sorry that I finally figure out $DC$ is not the tangent. However I found a easier solution:

11
Proof of parallel lines
7
IMO 2014 problem 3, first day
6
Collinearity problem (Newton-Gauss line)
0
A rectangle with a triangle
2
A Geometry problem from OMK 2017
1
A convex quadrilateral with propotion
8
simple looking but hard to prove geometrical problem: prove that 4 points on the same circle.
1
Given a compass + straightedge, construct convex quadrilateral tangent to circumcircle
0
How to prove that the area of quadrilateral $EHFG$ is equal to the sum of the areas of triangles $AGB$ and $DHC$?
1
Prove that $\frac{PQ}{MN} = \frac{|[BCE] - [ADE]|}{[ABCD]}$ in a quadrilateral ABCD where P and Q are related to the diagonals