I am to determine the the range of the volume of a tetrahedron enclosed by the coordinate axes and a tangentplane on the ellipsoid $x^2 + 2y^2 + 3z^2 = 1$. The volume of the tetrahedron can be derived to be given by

But it turns out that this is the smallest volume the tetrahedron can assume but Lagrange's multiplier-method does not give us this information. How can we ascertain that this indeed is a minimum and not a maximum point? Also one thing I wonder is whether there is any boundary to study, to me it appears there is no boundary but perhaps I am mistaken?

I'm going to re-cast a couple of your expressions, as it may be helpful in answering your question. It appears that the tetrahedron for which you wish to extremize the volume is bounded by the three coordinate planes and an inclined plane which is tangent to the given ellipsoid. (We will work with the portion of the ellipsoid that is in the first octant, but analogous results can be obtained in all eight octants.)

this last result being found by applying the equation of the ellipsoid. We may conclude from this that the coordinate axis intercepts for a particular tangent plane are given by

This leads to the result you show for the volume of the tetrahedron,

Applying the Lagrange-multiplier method (which I won't recapitulate), you found the tangent point in the first octant which extremizes the tetrahedron's volume to be

and the extremal volume of the tetrahedron as you've given it. Here is a graph of the situation (the ellipsoid has been made a trifle "too large" to make the point of tangency visible): 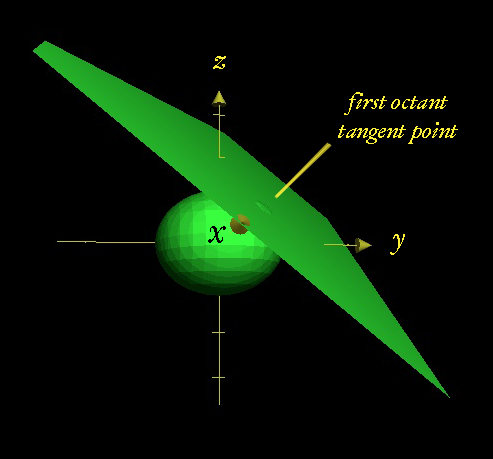 A limitation of the Lagrange-multiplier method, interpreted geometrically, is that it only locates points on the constraint "surface" where a normal vector lies in the same direction as the normal vector of a specific "level surface" of the function to be extremized. The graph below shows the ellipsoid with the level surface

represented in three dimensions as $ \ z \ = \ \frac{1}{9\sqrt{2} \ xy} \ $ ; the tangent point occurs at the same position as given above. "Lagrange" does not tell us directly whether a particular extremum is a local maximum or minimum of the function $ \ V \ $ . (Again, the ellipsoid is made a bit "too large" to allow the location of the tangent point to appear in the graph.) 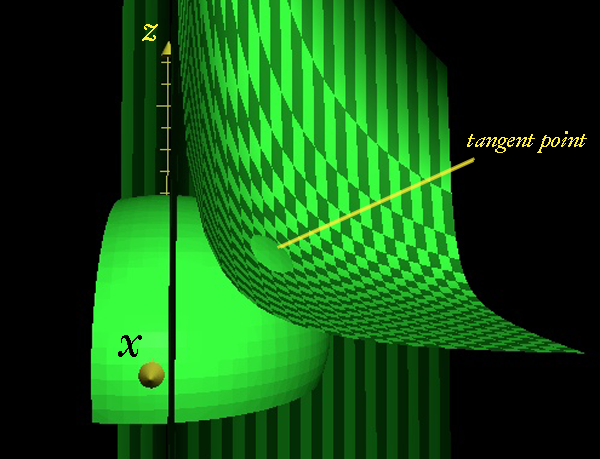 But we are able to say that possible tangent points to the surface of the ellipsoid can be taken all the way to any of the coordinate axes. This can make one or more of the coordinates of the tangent point, $ \ X \ , \ Y \ , \ Z \ , $ equal to zero, sending the corresponding axis intercepts toward infinity. Thus, tetrahedra bounded by the coordinate planes and the tangent plane can have volumes without any upper limit. (Under the geometrical interpretation, the tangent point only occurs on "level surfaces" for larger and larger values of $ \ V \ $ . ) So the volume found from Lagrange multipliers must be the minimum possible.

Not the answer you're looking for? Browse other questions tagged multivariable-calculus lagrange-multiplier or ask your own question.

0
Maximizing the volume of a box using Lagrange multipliers