Curve on a basketball

The sewing pattern on a basketball is composed of two great circles and a single curve that intersects each great circle twice. Does this curve have a name? Are there any parametric descriptions of the curve?

The same question can apply to the sewing pattern on a tennis ball.

Answers about why this sewing pattern came to be used are also welcome.

Actually I thought the seams on a basketball were two great circles and two ovals that each intersect the same great circle twice. And so apparently do many people who make basketball texture maps one can find on the web. (Randall Munroe too).

It is difficult to settle the question without having a physical ball to inspect; a usual photograph doesn't show both poles of the ball which is one needs. However, here's a photo showing that at least some basketballs are constructed like you describe: 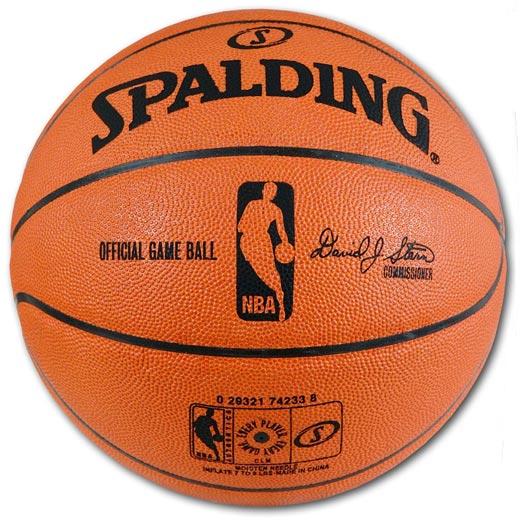 I don't think the shape of the curved seam has a name -- judging from the photos I've found its precise shape can vary from ball to ball. The most realistic-looking images look like it's made up of four about 150° arcs of great circles, joined by curved segments near the poles, but how tight the joining curves are seems to vary.

From a construction point of view, the one-curve design does make more sense, because then the seams divide the surface of the ball into eight congruent pieces, each of which can be cut out of flat material without too much distortion (at compared to dividing into eights by three great circles), and also without needing eight-way meets at the poles. With two great circles and two ovals, the pieces would have two different shapes.

Incidentally, I don't think they're actually seams with modern manufacturing methods -- just a decoration that's put on the ball for reasons of tradition, and possibly to make it easier for players to perceive its spin.

I don't have a basketball here to compare. However, I can say that the seams on a baseball and on a tennis ball are similar to the intersection of Enneper's minimal surface with a sphere centered at the, well, the origin of all the symmetries of the surface. See also HERE.

Edit by Mario: Here is an animation of the basketball curve based on the idea given above. The degree to which the two bells of the curve approach each other depends on the radius of the sphere chosen to intersect the surface; this animation uses $r=\frac32$, which produces a reasonable approximation.

Not the answer you're looking for? Browse other questions tagged parametric applications spherical-geometry or ask your own question.

1
Number of reflection symmetries of a basketball

8
How do I map a spherical triangle to a plane triangle?
1
Number of reflection symmetries of a basketball
7
Circle rotating within a circle (roulette)
2
Calculating the surface area of revolution for parametric equation.
6
Is there any difference between a parametric equation and a vector function?
0
Intersection of regular curve with plane
3
Geodesics on the 3-Sphere vs Hopf Circles
0
Existence of regular spherical n-gons
1
Parametrization of a curve 3
1
How to compute equally spaced points on involute curve