I was asked to read about Graph Theory. First got the book "Graph Theory with Applications" by Bondy and Murty. As a Computer Science student its becoming difficult to read and understand. Then I started reading "Graph Theory-Modeling, Applications and Algorithms" by Agnarsson and Greenlaw. They presented the same topics little bit easier but from a different point of view. I found the definitions are bit different. But they essentially mean the same.

I like Doug West's book called Introduction to Graph Theory. It's a breadth book, covering the basics including cycles, paths, trees, matchings, covers, planarity, and coloring. There are algorithms covered like Dijkstra, Kruskal, Ford-Fulkerson, Bipartite Matching, Huffman Encodings, and the Hungarian algorithm. There is also a lot of relevant theory you will want.

You also get topics like spectral graph theory, random graphs, and matroids if you want to cover them. I like that it has an appendix with a bunch of NP-Completeness proofs as well. Those are a really good reference to have as a CS person.

I come from a CS background but am majoring in math, so I have a healthy appreciation for both. Hopefully this helps.

On a side note- if you come across the Alan Tucker Applied Combinatorics text, you should pass on it. I didn't like it very much. It has good problems, but not very good explanations.

Tip for studying graphs: Don't study with only one book. It's a good thing to have $3-4$ books, because sometimes, one of the books obscures some points which others help to clear it up. Reading the handbook of graph theory, I had a little trouble understanding the following:

I somehow felt unsafe to assume what was the maing of $E(P)$ and $f_P$ And then, the following text on Graph's, Networks and Algorithms helped me to clear it up: 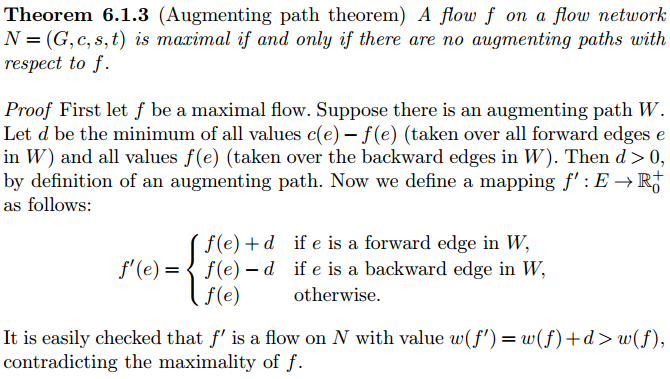 I had the same problem in the other direction too. Understanding the algorithm of Ford-Fulkerson in the Jungnickel's book was very hard. But in the HGT, it became easy. The only problem I had was with that part in the HGT.

I think "A First Course in Graph Theory by Gary Chartrand" is a great introductory textbook on Graph Theory for any person, no matter what their background is. It is also inexpensive.

Not the answer you're looking for? Browse other questions tagged reference-request graph-theory book-recommendation or ask your own question.

14
Books/lecture notes/videos on category theory for programmer
26
Exceptional books on real world applications of graph theory.
11
Books on logic, proof theory and set theory?
0
What is meant by “restriction” in subgraph definition
9
Category theory for graph theory research
7
Book suggestions: Introduction to Measure Theory for non-mathematicians
3
Graph Theory - what are related fields in maths?
0
Ambiguity regarding the definition of 'path' in graph theory
10
How to read Spectral Theory of Graphs