Measuring angles in a prism

This is related to my previous question: Maximum sum of angles in triangle in sphere.

We can measure angles while walking around on the sphere, because locally, it looks like $\mathbb{R}^2$. So we would go about measuring just as we would on a plane. I know this is because the 2-sphere is a topological manifold.

But what about on a prism? That still looks like $\mathbb{R}^2$ on points in an open subset of each face, but what about the edges?

To illustrate my point, take a cube. Cut a corner off, and put it back so that the cube is restored, except with a "line" we have "drawn" around one corner. In the surface of the cube, is this one line, or three? If it is three lines, then these lines form the edges of a triangle in the cube. How do we define the angles of this triangle? It is more like a triangular pyramid with the base removed. Let us call, for the sake of clarity, the edges of the triangle thus formed sides, and the edges of the original cube we will call edges. Back to the "triangle". Do we measure the angles in the surface as well? I.e. instead of taking the angle between two sides as the angle between the two planes those sides lie in, do we first measure the angle between the side of the triangle and the edge of the cube, and do that for the other side as well, then sum the angles?

It is a bit like the taxi-cab metric. Instead of using the hypotenuse, using the sum of the lengths of the sides (containing the right angle) as a measure of distance. This raises an interesting question--is there an analogue of the celebrated Pythagorean theorem for angles?

Perhaps this has something to do with how we "chart" a cube when we are constructing it as a manifold. My first instinct in charting a cube is to map each face to a subset of $\mathbb{R}^2$, but then I realized that these faces would have to be open, and thus the edges would be left out. The next atlas I thought of was to wrap around four sides of the cube, the way sushi is wrapped, just like charting a cylinder. Except it would require three wraps in different directions to cover the edges, and even then, I'm not sure if the corners are patched.

My differential geometry and topology are quite basic; I'd be grateful for accessible explanations.

More questions: (i) Is the cube a surface without boundary, like the sphere? I know it is closed.

(ii) Do the sharp edges prevent it from being a smooth manifold?

I have to admit that I don't understand your questions, but at least I can address, "but what about the edges?" This picture shows that there is nothing special about the edges. The Gaussian curvature is zero along edges just as it is in the interior of a face. Unfolding geodesics across edges straightens them, as illustrated. Angles are measured across the edge unfolding as in a face. 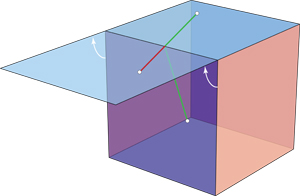 (Figure from How To Fold It: The Mathematics of Linkages, Origami, and Polyhedra.)

Not the answer you're looking for? Browse other questions tagged geometry differential-geometry or ask your own question.

6
Maximum sum of angles in triangle in sphere
3
Is it mathematically correct to say that if the metric is flat/curved the *shortest* path is/not a Euclidean straight line?

5
Measuring curvature in Flatland
4
Angles between two vertices on a dodecahedron
3
Is there a term for these kinds of 3D angles?
4
How to prove that equilateral triangle formed by cube's corners cannot be fully inserted to this cube
4
Angles of a Triangle
4
Dihedral angles of a pentakis dodecahedron
1
Compute the dihedral angle of a regular pyramid
0
Deducing angles in an equilateral triangle with normals to surfaces
2
Can an angle between the subdividing segments and the edges of a triangle be determined only by interior angles and the intersection of the segments?