Geometry, Find sides of a triangle 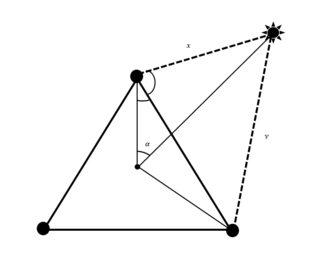 Any help will be appreciated. 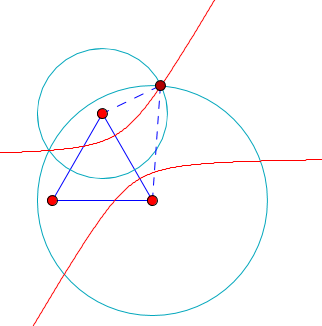 The lower branch would have the sound arriving at the lower corner first, so you are only interested in the upper branch. The red curve is a hyperbola, with the corners of your triangle as foci. That's one defining property of a hyperbola.

Different positions on the upper branch of the hyperbola would lead to different angles $\alpha$. So the angle isn't known either. In many situations, the most reasonable thing you can do is concentrate on the case where the distance between sensors and sound source is much larger than the distance between the two sensors. So you could use the direction of the asymptote as an approximation.

To do that, consider a right triangle constructed between your two sensors. The idea is that sound waves would be parallel to one of its legs, and travel in the direction of the other leg. Construct it in such a way that the length of that second leg (which is the leg incident with the sensor where the sound arrived later) matches the difference in distance that you calculated. 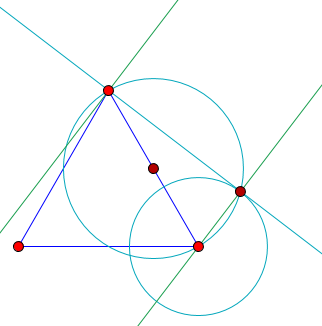 From that you can read off the angle of the direction where a sound source far away would be located.

0
How do i find this angle in a right triangle?
19
Equilateral triangle whose vertices are lattice points?
5
two sides and angle between them triangle question.
0
Euclidean geometry (triangles) - homework
0
Inside angle of a triangle with two sides of known ratio and one known side?
5
Find the sides of the triangle.
1
Is it possible to solve for the unknown sides and angles in the top triangle?