Slice of a coordinate system in a manifold

In the book - Foundations of differentiable manifolds and Lie groups by Frank Warner, the definition of a slice is as under.

Now, it seems to me that, even though in the definition we are fixing the last few coordinates, we could do the same to any random coordinates (not necessarily the last few) and still we would get a slice (if we can call that one).

He follows this by a remark in which I have a doubt. The remark is as follows 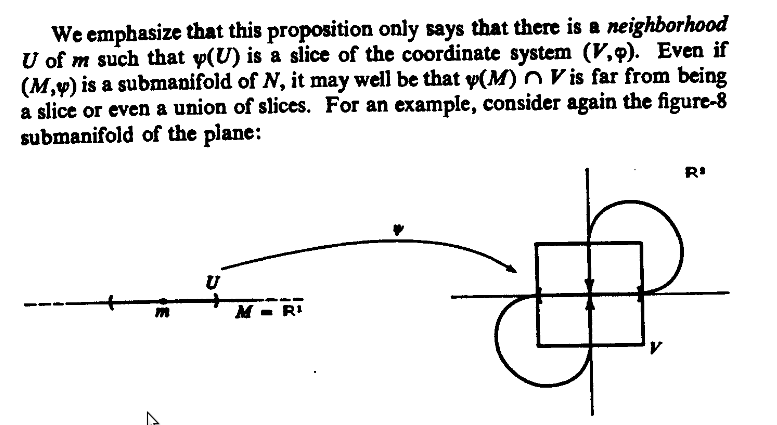 I don't understand this example. Isn't $\psi(M)\cap V$ a union of two slices, the x-axis portion and the y-axis portion? Any help will be appreciated! Thanks in advance.

As for the first question, since a permutation of the coordinates is a diffeomorphism, any set of coordinate functions is admitted. It's just easier to write it down that way.

As for the second question, note that the $y-axis$ is divided in two parts which meet a the orign (and the origin is excluded from the set, note the tip of the arrows).

Not the answer you're looking for? Browse other questions tagged differential-geometry manifolds or ask your own question.

2
Frobenius Theorem; Slices
2
Unique manifold structure
5
Bijective immersion is a diffeomorphism
4
Passive and active coordinate transformation on a topological manifold.
1
$C^{\infty}$ vector field along an immersion has local $C^{\infty}$ extensions
1
natural projection on a slice
1
equivalent characterizations of differentiability of maps between smooth manifolds (a la Warner)
1
Definition of a cubic coordinate system
0
Equivalence between submersion and a particular coordinate system
1
A submanifold is embedded iff it satisfies the local k-slice condition