What's the intuition? Are there pictures? I'm not enquiring about formal arguments, so this is not a duplicate of any other question.

There's two main ideas involved in the proof of these statements.

Once you have intuition for these things, it should be easier to understand the formal proof. 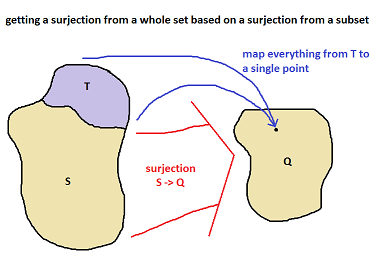 Not the answer you're looking for? Browse other questions tagged elementary-set-theory functions intuition visualization or ask your own question.

4
Is $\mathbb{Q^+}$ countably infinite?
1
Injection, Surjection, Bijection (Have I done enough?)
3
Help prove $f:X \rightarrow Y$ is an injection $\Leftrightarrow$ $f:X\rightarrow Y$ is a surjection when $|X|=|Y|$
2
Set Theory Problem bijection
1
Subsets of countable sets are countable
0
If $f:B \to A$ is a surjection, then there exists an injection $h : A \to B$ such that $f \circ h = I_A$
1
Evaluating correctness of various definitions of countable sets
1
If $A$ is infinite, then $\mathcal{P}(A)$ is uncountable
0
$A\neq\emptyset,\; B\neq \emptyset, \;A\times B \;\text{finite} \rightarrow A\; \text{and} \;B $ are both finite too.