Are there surfaces with more than two sides?

I'm watching a naive introduction to the Möbius band, the lecturer asks if it's possible to construct a one sided surface and then she says that there is one of these surfaces, namely the Möbius band. Then she mentions that some surfaces have two sides.

I've also had this doubt when reading Flegg's From Geometry to Topology. So, is it possible to have a surface with more than two sides? My intuition says no, but perhaps someone made some magic trick and made it somehow. I've looked at some wikipedia articles and I've seen no mention to something with more than two surfaces (I've used my browser search tool), unless such surfaces have other names.

I guess that the tags should be geometry and topology, if you think there is something more, please edit.

Here's an intuitive explanation (and I am writing this under the assumption that the surface is connected).

To summarize: the reason there are not "3 or more sides" is that there are exactly two sides locally, and those two sides are either globally equivalent or globally inequivalent. When you have an equivalence relation on a set of two elements, the number of equivalence classes is either one or two.

Getting a true answer to your question requires some familiarity with differential topology (or algebraic topology), which I assume in what follows. My favorite reference is do Carmo's "Riemannian Geometry".

The definitions below are (intentionally) formal (you had enough informal input from other answers). To gain an intuition, one should work out specific examples of surfaces in $R^3$.

In order to keep things simple, I will assume in what follows that $S$ is a smooth hypersurface in an $n$-dimensional Riemannian manifold $(M,g)$, i.e., $S$ is a smooth submanifold in $M$ and $S$ has dimension $n-1$. (The assumptions of smoothness and presence of a Riemannian metric, simplify definition and proofs but can be avoided by doing a bit more work. To avoid using Riemannian metric I would have to define the normal bundle of $S$ in $M$. To eliminate smoothness assumptions, I would have to invoke some heavy machinery from the theory of topological manifolds.) For concreteness, you can consider the case when $M=R^n$ with the standard metric.

Definition. A coorientation of $S$ is a choice of a unit normal vector field $\nu$ to $S$. A submanifold $S\subset M$ is called coorientable if it admits a coorientation.

Exercise. Coorientability of $M$ is independent of the choice of a Riemannian metric on $M$: $S$ is coorientable if and only if there exists a continuous vector field $\xi$ along $S$ such that $\xi_x\notin T_xS$ for every $x\in S$. Hint: Use the orthogonal projection of $T_xM$ to the orthogonal complement of $T_xS$ in $T_xM$.

Exercise. a. If both $M$ and $S$ are orientable, then $S$ is coorientable.

Definition. Suppose that $S$ is connected. Then $S$ is called 1-sided if it does not admit a coorientation. (Such $S$ is said to have one side.)

Definition. A side of a connected hypersurface $S$ is a choice of coorientation of $S$.

This is a great question. In 1-dimensions - the degenerate case where you slice your surface appropriately - the Jordan Curve Theorem (YouTube video) says the curve will have an "inside" and an outside. 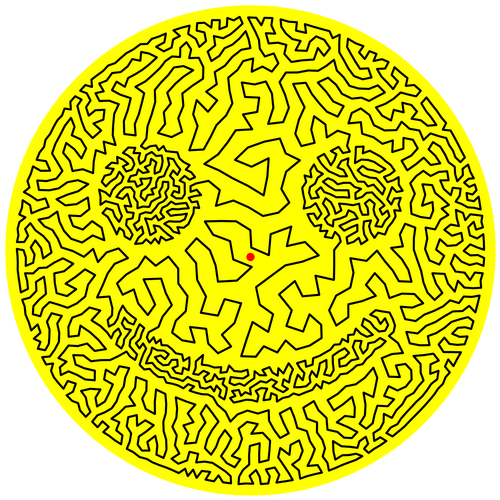 Not the answer you're looking for? Browse other questions tagged general-topology geometry or ask your own question.

1
get an idea about the definition of a side

2
Need help with geometry of surfaces
7
Homework: The Klein bottle retracts onto a loop.
2
What are the formulas for topological transformations? How to obtain them?
4
What is the general name for a surface of form $z = f(x, y)$?
1
Existence of Surface Parameterization
1
Help understanding the construction of twisted cylinder
5
Cutting a multiple twisted Möbius strip in half
3
Is the Trefoil knot isotopic to the unknot (torus) in ambient $\mathbb{R}^4$?
0
Paradromic rings and Mobius strip
2
Surface area of twisted prism