I espy why the IEP and the last line (after the red lozenge) are true for $m \le 3$ sets, thanks to pictures like this one on page 2 of 7. Yet I don't perceive it when $m \ge 4$ (which I don't think can be visualised) ? Whence does this expression originate?

You are right saying that no similar picture can be made with discs. However a set can be given any shape. Here's an example with four sets. 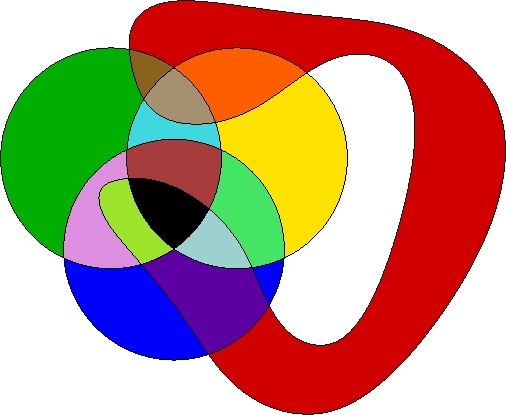 I'd like to answer this question from three different point of views. Here's a quick overview: We start with focus at

3.) Eye-birds view: The essence of IEP is just a shift by one

4.) No more answers, but further questions

Now to the details:

In our example the objects are the elements contained in $A_1,\dots,A_n$ and the properties of an element $x$ are the sets $A_j,1\leq j\leq n$, which contain $x$.

If we have this essence of IEP in mind and we look at the expression:

we observe, that the right hand side (RHS) consists of summands with at least information. Because e.g.

Since these sets $A_j$ are not disjoint (they contain $x$), some elements are counted more than once. Those are the elements that belong to at least two of the sets $A_j$, or the intersection $A_i \cap A_j$. This is valid especially for the element $x$. We wish to consider every such intersection, so we subtract $\binom{m}{2}$.

This process goes on with sums being alternately added or subtracted until we come to the last term - the intersection of all sets $A_j$.

These arguments are for better insight only. To see that the RHS identity $(2)$ is clearly valid, we observe

Some more and alternative insight into the relationship between exact and at least information is provided in the next section.

3.) Eye-birds view: The essence of IEP is just a shift by one

It's remarkable, that from a higher point of view, namely when using generating functions this information is condensed and encoded by a simple shift by one in the arguments.

Note: This shift by one provides a kind of bird's-eye view to the alternating sum of the IEP.

From this we conclude that

The coefficients $e_m=[z^m]E(z)$ giving the number of elements which are in exactly $m$ sets can now be calculated from $L(z-1)$.

Summary: From this generating functionological view and adapting H.S.Wilf (see section 4.2 from Generatingfunctionology): This is the Sieve Method (IEP): The act of replacing the variable $z$ by $z-1$ in the generating function $L(z)$ replaces the unfiltered data $\{l_m\}$ by the sieved quantities $\{e_m\}$.

This interesting question from LePressentiment gives rise to ask if there are further interesting principles based upon other binomial inverse pairs which could be applied to boolean algebras.

4.) No more answers, but further questions:

Question: Are there further inverse relation pairs which can be interpreted in the context of boolean algebras and which provide an interesting transformation of information similar to the IEP's at least to exact transformation?

No pictures are really needed, the left brain hemisphere can do this all by itself.

Not the answer you're looking for? Browse other questions tagged combinatorics inclusion-exclusion or ask your own question.