How elements are defined in axiomatic set theory

I'm trying to understand the axioms of axiomatic set theory. I'm studying this book and I didn't understand how can we define the elements of a set and the set $\{x\}$. If I define the singleton, I know how to define the finite sets using the union axiom. 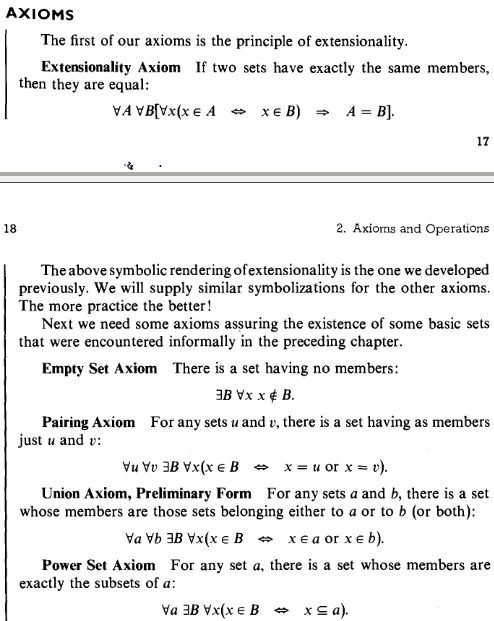 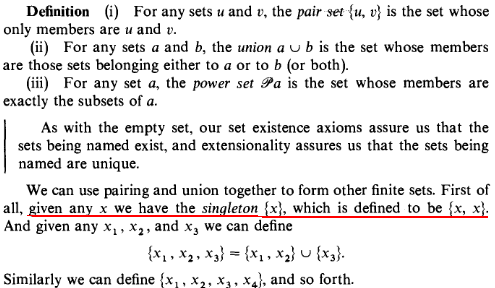 In the Pairing Axiom, there is nothing requiring the variables $u$ and $v$ to take distinct values. In the case $u=v$, the resulting set $B$ is a singleton set.

In axiomatic set theory we don't "define elements". Everything1 is an element, and everything is a set. There is no issue with sets being elements of other sets, if you consider the power set of $A$, it's a set and all its elements are sets themselves.

Axiomatic set theory says what are the properties of the $\in$ relation, and what sets we can prove to exist (given the existence of some sets).

It might be strange, at first, to talk about "proving that $\{x,y\}$ exists", because when we first start with mathematics we are used to be given a world, and work in that world. The real numbers are given, we don't have to prove that $\sqrt2$ or $\pi$ exist, of course they do. There's no question.

But in logic, and in set theory, we transcend to a more abstract universe of mathematics, a universe which are we not familiar with, and can't fully imagine. And in that universe all we have is the axioms of set theory and $\in$, to light up our way as we trudge through the sets. So if you want to argue that there is a particular set, e.g. $\{x\}$, in the universe of set theory, then you have to prove that from your axioms.

Even if it seems "obvious", and even if it seems "preposterous". All that matters is that we can prove or disprove things. Luckily the axioms were chosen to be very compatible with our intuition when it comes to basic things like the existence of $\{x\}$, or the power set of $x$, and so on.