Confused by the Bolzano Weierstrass Theorem

I just came across the Bolzano-Weierstrass Theorem (every bounded sequence has a converging subsequence), it was stated somewhere without proof. So curious as I am, I looked for a proof in the Internet.

The proofs I found consist of 2 Lemmas: (1) Every sequence has a monotonic subsequence, and (2) Every bounded monotonic sequence converges.

I think I understand (1): a sequence either has a finite or infinite amount of peaks (all values after a peak are less than the peak). If there is an infinite amount of peaks, then the peaks form a monotonic decreasing sequence. If there is only a finite amount of peaks (so also 0 peaks would be valid), then a value $n_1$ after the last peak is less than the last peak (by definition -- and in case of 0 peaks, $n_1$ is the first value). So there must be a $n_2$ somewhere after $n_1$ which is greater, otherwise $n_1$ would be a peak. Then there should be a $n_3$ greater than $n_2$, otherwise $n_2$ would be a peak. Repeat, and find a monotonic increasing sequence.

Now about (2). Assume the sequence ($a_n$) is monotonic increasing, for the decreasing case it is similar. Since the sequence is bounded, there is a least upper bound, $l = \sup(a_n)$. They say this $l$ is the value the sequence converges to, but why...?

For example, if the sequence looks like a exponential function, it is monotonic increasing. Just cut off this function somewhere, and it is a bounded monotonic sequence, right? So then the least upper bound $l$, in this case the maximum value, should be the limit of the sequence? 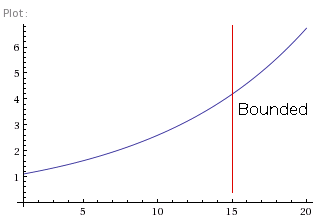 Since the main sequence in the Bolzano-Weierstrass is bounded, it has a monotonic subsequence according to (1), and is bounded as well? Then this subsequence converges.

Finally, I read another proof where the "Nested Interval Theorem" is used. It was about dividing the interval until there is only one point (?), so this point would be the limit of the sequence?

By the way, my background is Mechanical Engineering, so I'm not that used to reading and understanding proofs.

It looks like you're quite on top of the first lemma you describe. Please clarify if you need any help with that.

For the second one, I think your confusion is caused by you misunderstanding "bounded", or at least getting the wrong mental picture when you see it. A bounded sequence still contains infinitely many points -- that it is bounded means that all of the points lie within the same interval on the $y$-axis.

Therefore, Bolzano-Weierstrass says that $(\sin(n))_n$ contains a convergent subsequence. It is not easy to write down one explicitly, though. (Since we're mathematicians here, $\sin(n)$ treats $n$ as an angle in radians, so there's no value in the sequence that repeats exactly).

If $l$ is the supremum of your sequence $(a_n)$ then, by the very definition of the supremum we have the following:

But since your sequence is monotonically increasing, you have $a_m \geq l-\varepsilon$ for every $m\geq n$. This is exactly what it means for the sequence $(a_n)$ to converge to $l$.

Not the answer you're looking for? Browse other questions tagged sequences-and-series convergence-divergence or ask your own question.