Two triangles, only one different side, same area? 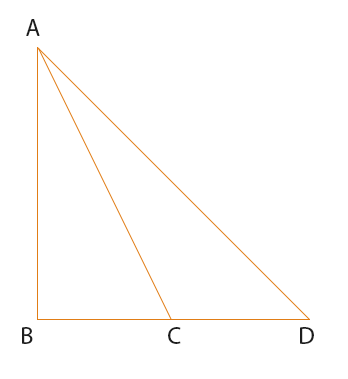 Where $BC = CD$. Obviously, the area of $\triangle ABC$ and $\triangle ACD$ are equal, since they both share the same base, and the same height, namely, $AB$.

I was able to prove that their area is the same using the vector form of the area calculation, by taking half of the area formed by the parallelogram formed by their sides, which is calculable by the cross product of the vectors defined by the sides.

However, by looking at Heron's formula, which only relies on the lengths of the sides, something (apparently) weird struck me: since I can calculate their areas simply knowing the side lengths, how have they come to have the same areas, since they share two equal sides, $AC$ and the base, but clearly $AD > AB$ ? Since all values are the same on Heron's formula, except for that third side, how come the areas end up being the same?

What I really mean is: is there any more deeper meaning to that, or should I just consider it a coincidence?

You can see what's going on without algebra. Given sides $a$ and $b$ there will always be two triangles with the same area for each angle $\theta$ at the intersection of $a$ and $b$ (except at the maximum area). 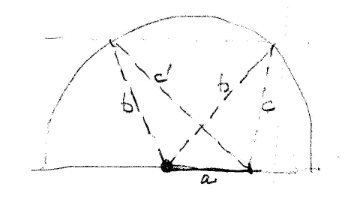 Another way to see this analytically is to note that the area of the triangle is $ab \sin(\theta)/2$.

3
Given perimeter of triangle and one side, find other two sides
25
Do side-rational triangles of the same area admit side-rational dissections?
2
Similar triangle side lengths given its area and similar triangle side lengths
1
Calculating the area of a triangle assuming you don't know Heron's formula
1
The formula for the area of two triangles determined by the diagonals of a trapezoid
3
Area of rhombus given circumradii of its contained triangles
8
How do you show that, for any integer, there is a triangle with side rational lengths and that integer area?
2
Quadrilateral/Geometry: Find the area of all the triangles in a trapezoid
1
What is the scale factor of the two similar triangles?