Perpendicular lines inside and outside a circle

Let $\Delta ABC$ be inscribed inside a circle.Let $P$ be a point on the circle.Let $PD$ and $PE$ be perpendiculars on on $BC$ and $AC$ respectively.Let $DE$ when extended meet $AB$ at $F$. Then it is required to prove that $PF$ is perpendicular to $AB$. 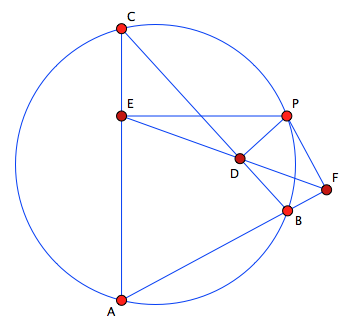 For convenience of description,I will assume that $P$ is opposite to angle $A$.

I have tried the following things:

After that,I tried some other constructions(such as extending $FP$) but they turned out to be fruitless attempts.

The facts that I haven't used until now:

The only way that I can see a use for this information is by constructing $PB,PA$ and saying that

But that does not help me get any further.

Some hints as to how I can approach such a problem will be appreciated.

Not exactly sure if this is any simpler, or different from whats said from above...but anyways

Therefore CEDP is a cyclic quad (If an interval subtends equal angles on the same side, then the two end points and the two interval points are concyclic)

*Therefore DPFB is a cyclic quad (If an interval subtends equal angles on the same side, then the two end points and the two interval points are concyclic)

PF is perpendicular to AF as ∠PFA = 90

Now consider the complete quadrilateral formed by the lines $ABF, ACE, BCD$ and $DEF$. You can view the plane as $\mathbb{CP}^1$, the complex projective line, and in that setup, a line is simply a circle (of infinite radius) passing through the point at infinity. So these four lines are a special case of four circles passing through the point at infinity. Now you can apply Clifford's first circle theorem to conclude that the circles $\bigcirc ABC, \bigcirc AEF, \bigcirc BDF$ and $\bigcirc CDE$ must intersect in a single common point.

Since $\bigcirc ABC$ and $\bigcirc CDE$ intersect in $P$, as seen from the cocircularities stated at the beginning of this answer, you get that $AEFP$ and $BDFP$ must be cyclic as well. Now both of these already have one right angle, so by Thales' theorem, the angle at $F$ must be a right angle as well. 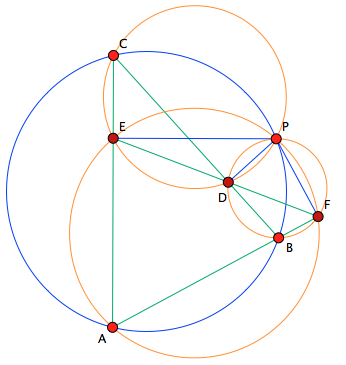 Even without projective geometry and Clifford's circle theorems, knowing about these additional cocircularities might help you in making deductions about the various angles. In that sense, this answer here might also serve as a hint. Using that, I was able to find the following angle-chasing sequence. Start by $ABCP$ being cyclic:

$CDEP$ is cyclic as well, and Thales.

Then you can check that $\angle DFB = \angle DPB$ so $BDFP$ is circular and therefore Thales.

Not the answer you're looking for? Browse other questions tagged geometry euclidean-geometry triangles or ask your own question.

1
In this figure, prove that $H$ lies on the circle iff it lies on the perpendicular bisector of $\Delta ABC$
1
problem about Circumscribed circle of triangle
2
Compute angle $\gamma$ between a line and a plane if the line forms angles $\alpha$ and $\beta$ with two perpendicular lines lying in the plane.
0
$ABC$ is an inscribed triangle, $PM\perp AB$, $PN\perp AC$ and $PR\perp BC$. Prove that MNR is called Simson line.
5
Triangle and Circle maximization problem
1
prove that the quadrilateral $ABDC$ is a cyclic quadrilateral
0
cyclic quadrilateral inside an isosceles right triangle
1
Showing that $5$ points lie on the same circle