I was playing around with Sierpinski carpets (see pretty GPU-produced picture here), and came up with a variation that I have been unable to find mentioned elsewhere. I'm wondering if anyone can tell me an existing name for it, and help me determine where it fits into existing classifications of fractals.

As you probably know,

The construction of the Sierpinski carpet begins with a square. The square is cut into 9 congruent subsquares in a 3-by-3 grid, and the [open] central subsquare is removed. The same procedure is then applied recursively to the remaining 8 subsquares, ad infinitum.

In this variation, instead of merely removing the central subsquare, we recursively apply the same procedure to it "inversely." (Is there a better term for that?) That is, we treat the central hole as if we want to replace it with the complement of [this variant of] a Sierpinski carpet.

It looks something like this, in its 5th iteration: 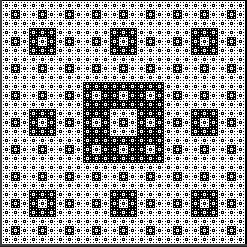 If you think I should post the code for this, I'm happy to, but I didn't think it was very relevant to the math question.

I've been calling it "Sierpinski tablecloth" since I couldn't find another name for it, and because it reminds me of a lace or crocheted tablecloth design.

Correction: @Rahul pointed out that "the limiting set of the recursive process does not exist." This is because the central point of the unit square must be part of both the tablecloth and its complement, or neither - which is impossible. (Of course we can still do finite iterations of the constructive process without hitting a contradiction.)

Another update: Unfortunately the same problem is true of any point with an irrational coordinate, and of many rational ones. If we express the coordinates in base 3, as with the Cantor set, a point is a member of T iff the number of 1's in the base-3 expansion of each of its coordinates is even. But this doesn't work for numbers with repeating 1's.

If we tried to fix this by making all "problem points" belong to T, we'd be left with "almost" a solid unit square, minus a "dust" of rational points with an even number of 1's in their base-3 coordinate expansions. Then T would cease to generate interesting fractal pictures (in the limit). Its area would be 1, like the irrationals$^2$. It's not clear to me that T would be different from the set of the irrationals$^2$ in any interesting way.

Mind you, we can still draw pictures of the nth iteration of the tablecloth that are fun to look at, but it loses a good deal of its bite if it doesn't exist as a fractal.

Can you think of a way to save the tablecloth from extinction as a fractal?

The rest of this question was written under the misapprehension that the tablecloth exists (is a well-defined set) in the limit.

The traditional carpet has Hausdorff dimension

This would put it in the same company (in terms of Hausdorff dimension) as space-filling curves like the Sierpinski curve, Hilbert, Peano, etc. Does this sound reasonable so far?

I'm not quite comfortable with that, though, because a 1/3-size copy of the tablecloth will not actually cover the whole middle subsquare. In fact I can't see how any finite number of reduced-size copies of the tablecloth would cover the whole middle subsquare. And if we say we need an infinite number, the Hausdorff dimension would be infinite. :-(

As an alternative, I considered multifractals, since we seem to have different scaling behavior occurring in different parts of the attractor. But that's deeper water than I'm prepared to wade into.

Similarly to Hausdorff dimension, the box-counting dimension (using the criterion "if the space were divided up into a grid of boxes of size ε, how many boxes of that scale would contain part of the attractor?") also seems to end up at 2, for much the same reasons. And I'm more comfortable with it because a "box" (as opposed to a reduced copy of the tablecloth) will indeed cover the whole middle subsquare. It seems clear that in the limit, the box-counting dimension converges to 2, because there are no gaps, so every box, at whatever size ε, will always contain part of the fractal.

In terms of area (standard Lebesgue measure), I'm pretty sure that the tablecloth has zero, like the carpet, because it has no intervals (rectangles) that are entirely in the set. Right? (Update: I stand corrected: the tablecloth seems to have area 1/2.)

There are several questions above, so to tie them all together: I'm wondering if this tablecloth variant is something new and interesting, or something well-known, or an unknown but trivial variant that can be classified under existing categories. E.g. if there is a variant of the Cantor set that is defined similarly to the tablecloth (for one dimension), I would appreciate a link to info about that.

(Update:) One thing that seems interesting to me about it is that it has points in every interval of the unit square, but it also has holes in every interval. I guess it's like rational numbers in [0,1] in that regard, or like space-filling curves/trees, yet is not a curve or tree (not connected). I can't think of other fractals off-hand that are like that, can you? It seems that this property is connected with the fact that we recur on the inverse instead of leaving holes.

I wrote a bunch of stuff about the properties of this set assuming it existed, then I realized that it wasn't even obvious that the set was well-defined.

Here's the problem: Does the central point belong to the set? If it does, then it does not belong to the middle block, and vice versa, leading to a contradiction. So the limiting set of the recursive process does not exist.

However, looking at the picture, it feels as though the limit "should" exist in some expanded sense. This could possibly be related to the way that some sequences of functions which do not converge to functions do actually converge to distributions. Or I could just be wrong and the limit simply cannot exist in any sense. Edit: Well, it turns out that the limiting measure contained in any rectangular region is just half the area of the rectangle. So I suppose it does have a limit in the sense of a measure on $[0,1]^2$, but it's not a very interesting measure.

The area, if it exists, is $\frac12$. Let the area inside the unit square be A. Then it is made up of $8$ copies at $\frac13$ linear size, plus the complement of a $\frac13$ linear size copy (the center square). So $A=\frac89A+\frac{1-A}{9}$. There is no problem having an area without a rectangle. See the Fat Cantor Set. I believe having positive area also supports dimension $2$.

Here's how I attempted to find the area of the Sierpinski tablecloth. Please forgive me if it's not mathematically rigorous enough, I'm new to this.

I tried to find the amount of squares over time with an arithmetic formula. We know for every white square in one iteration it will make one opposite and eight similar blocks. In this case the Black spaces will create white spaces in the style of an inverted Sierpinski carpet. This means that the formula for the amount of black squares is virtually identical to the one for white squares, but reversing the roles of black and white. So:

The group starts as one white block with no black space:

Of course each group blocks will get smaller over time because we make it $1/9$-th the size, and

Using the limit as $W_n$ and $B_n$ approach infinity we can see that:

Not the answer you're looking for? Browse other questions tagged general-topology fractals or ask your own question.

3
Is an Inverse Menger Sponge a fractal?