What is the Coxeter diagram for?

I understand that Coxeter diagrams are supposed to communicate something about the structure of symmetry groups of polyhedra, but I am baffled about what that something is, or why the Coxeter diagram is clearer, simpler, or more useful than a more explicit notation. The information on Wikipedia has not helped me.

Wikipedia tells me, for example, that the Coxeter diagram for a cube is

I gather that the three points represent three reflection symmetries, and that the mutual angles between the three reflection planes are supposed to be $45^\circ, 60^\circ, $ and $90^\circ$, but I can't connect this with anything I know about cubic symmetry. Nor do I understand why it is perspicuous to denote these angles, respectively, with a line marked with a 4, an unmarked line, and a missing line.

The diagrams are a way of describing a group generated by reflections. Any collection of reflections (in Euclidean space, say) will generate a group. To know what this group is like, you need to know more than just how many generators there are: you need to know the relationships between the generators. The Coxeter diagram tells you that information. There is a node for each generator, and an edge between the two labeled with the order of their product.

. By convention, edges that would be labeled "2" are omitted, and any "3" labels are left off, so we'd actually have

For a regular convex polytope $P$, there is a standard way to label the generators. Fix a base flag $\Phi$ (a maximal collection of mutually incident faces: a vertex, an edge, etc.) Since $P$ is regular, there are symmetries (i.e. isometries which take $P$ to itself) carrying each flag to every other flag; in particular, there is a symmetry taking $\Phi$ to the flag with all the same faces, except that it has the other vertex on the given edge. We call this flag $\Phi^0$, the 0-adjacent flag to $\Phi$, and the symmetry $\rho_0$. We can see that $\rho_0(\Phi^0)$ must be $\Phi$ again, and so $\rho_0$ is an involution (it's not hard to show that a symmetry which fixes some flag is the identity.)

Similarly, there is a unique flag $\Phi^1$ which has all the same faces as $\Phi$ except that it has the other edge containing the given vertex and contained in the given 2-face, and a symmetry $\rho_1$ which carries $\Phi$ to $\Phi^1$; and for every rank $j$ up to the dimension of $P$, there is a symmetry $\rho_j$ carrying $\Phi$ to the unique $j$-adjacent flag $\Phi^j$.

For this reason, the Coxeter diagram of the symmetry group of a regular polytope will be a string (like the example you gave for the cube). Conventionally the nodes are given left-to-right as $\rho_0, \rho_1, \dots$. If the labels on the edges are $p, q, r, \dots$, then the abstract Coxeter group associated with the diagram is often called $[p,q,r,\dots]$.

The abstract Coxeter group is simply the group defined by the presentation inherent in the diagram, i.e. for your example

Here's the diagram of the 4-cube.

The corresponding Schläfli symbol is {4,3,3}:

It is probably clear that for regular polytopes, you might as well just use Schläfli symbols. But there are many groups generated by reflections which are not the symmetry groups of regular polytopes. Every such group is described by a Coxeter diagram.

Perhaps you are more familiar or comfortable with the idea of defining a group by such a matrix (called a Coxeter matrix.) In this case, it's worth emphasizing that a Coxeter diagram and a Coxeter matrix are entirely equivalent. Some people go so far as to identify the two.

The advantages of the diagram are that the matrix is redundant; you only need the entries above the diagonal (or below it.) Also, diagrams make it more clear when things commute and highlight the "interesting" relationships (when order is more than 3) so that they're not lost in the noise. For instance, in the diagram for a $p$-gonal prism:

it is immediately clear that we have the symmetry group of a $p$-gon, and another reflection orthogonal to both the generating reflections of the former. This is perhaps not as immediate looking at the matrix $\begin{bmatrix} 1 & p & 2\\ p & 1 & 2 \\ 2 & 2 & 1\end{bmatrix}$.

From diagrams to polytopes

This is not my area of expertise, but it addresses the parts of your question about angles, and the mysterious extra circle in your diagram for the cube.

Given a Coxeter diagram with $n$ nodes, you can construct reflections in $n$-dimensional space to realize the Coxeter group. For convenience, we'll identify reflection isometries with their hyperplane of reflection, so if $\rho$ is a reflection, then $\rho$ also means the hyperplane fixed by $\rho$.

To get the product of reflections to have order $p$, you want their hyperplanes of reflection at an angle of $\pi/p$ to each other, since the composition of the two reflections is a rotation by twice the angle between them.

The composition would have the same order with an angle of $m\pi/p$, where $m$ is relatively prime to $p$. The group generated ends up being the same, so you might as well work with the hyperplanes at an angle of $\pi/p$.

I don't really know how to go about finding planes that have the specified relationship, but you can visualize how to do this one. Start with two planes which are orthogonal to eachother: call them $\rho_0$ and $\rho_2$. Stick in a plane which forms an angle of 45° with $\rho_0$; you can start with it also being orthogonal to $\rho_2$, so we have the situation in depicted in this picture. On the left, we have transparent plane segments; on the right, they are opaque. I am thinking of $\rho_2$ as the horizontal plane, $\rho_0$ as the vertical plane coming straight out of the page, and the "new plane" (intended to be $\rho_1$) as the plane going from corner to corner.

Come to think of it, on a sphere whose center is the point of intersection of your three planes, the spherical triangle cut out by the planes will have angles 45°, 90°, and 60°. So I guess finding such spherical simplices is a general method to do this. A more systematic way of finding some reflection planes for your group seems to be described in Arjeh Cohen's notes on Coxeter groups, Section 2.2: The reflection representation.

Anyway, one way or another, you've found some reflections whose compositions have the prescribed order. Now to find a polytope which the group generated by these reflections act on, just pick any point in space, take all its images under the reflections, and voilà! The convex hull of these points is a polytope acted on by the group. This is known as Wythoff's construction, or a kaleidoscope (because the original point is replicated by all the reflection planes just as a colored dot is replicated in a kaleidoscope.)

Many choices of points yield combinatorially identical (or isomorphic) polytopes; for instance, taking any point which is not contained in any of the planes of reflection will result in isomorphic polytopes. More interesting things happen when the initial point is in some of the planes (but not all the planes; then its orbit under the group is just a point.)

As an extension to the Coxeter diagram, you circle all the nodes of the diagram corresponding to reflection planes that DO NOT contain the initial point. (This might seem kind of backwards. It probably is.)

On the right, we see that the convex hull of these points is indeed the cube. 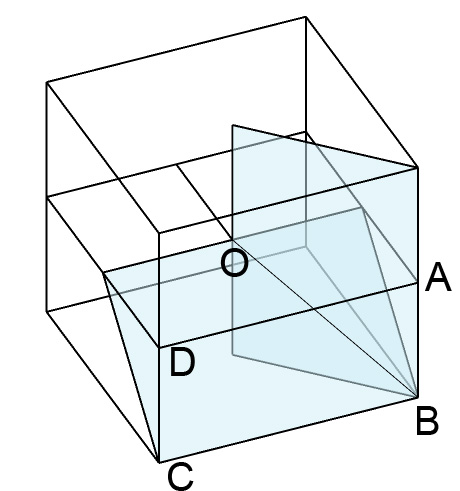 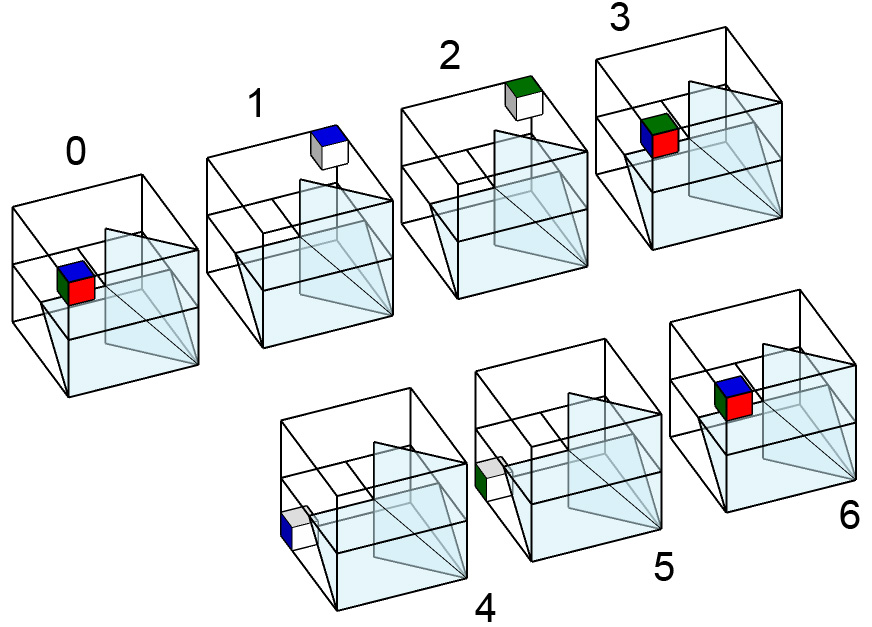 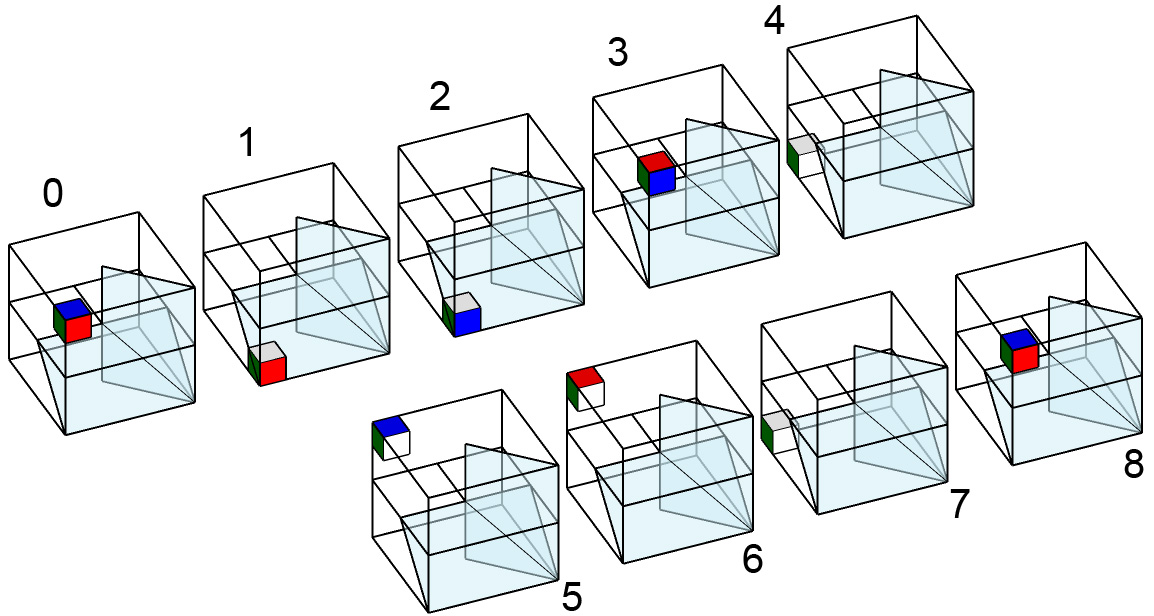 In addition, when there are multiple edges between two nodes, we add an arrow to indicate which one is a long root, which one is short. Then the resulting diagram is called called a Dynkin diagram. Dynkin diagram completely determine the root system up to isomorphism.

Not the answer you're looking for? Browse other questions tagged geometry reference-request notation polyhedra coxeter-groups or ask your own question.

5
What is a Coxeter Group?
3
Create Platonic solids from the coxeter group (vertexes & edges & faces)
6
Symbols to represent each distinct symmetry of polyhedra
2
Constructing normalvectors of hyperplanes in $\Bbb R^n$ with given angles to each other

4
Radians (and angles in general) how do they work?
1
n lines in the plane
1
The Undefined Terms in Geometry (i.e. points, lines & planes)
0
What is going on with the symmetry group of the cube?
4
Symmetries of a 4-demicube
4
Polyhedra that cover the sphere more than once