Did the world experience a “mathematical drought” at any time in history?

Mathematics history goes back pretty far: the Greeks were studying it in 600BC, the Babylonians and Egyptians all the way back beyond 2000BC, and there's even some evidence of prehistoric mathematics. Calculus was born in the 17th century, and modern mathematics, in the sense I usually hear that term, seems to have started somewhere in the 19th century. There's a lot of time between those intervals.

Was there ever a gap in history where not much mathematics was discovered?

The Wikipedia page Timetable of Greek mathematicians has a graph that may be quite useful for identifying the fast and slow periods of ancient Greek mathematics. Assuming that the graph has included a "complete" representative list of mathematicians, the amount of mathematical activity at a given time should be roughly proportional to the steepness of the curve. It's a very fuzzy and subjective judgment call here, but (except for a couple of noteworthy outliers like Ptolemy) I'd say the entire Pax Romana period was a time of relative mathematical drought compared to the Hellenistic and classical Greek periods.

The overlapping lifetimes of the mathematicians listed have only two gaps of time during which no one is alive: between the death of Geminus and the birth of Cleomedes, and between the death of Ptolemy and the birth of Diophantus. Interestingly, the first gap coincides pretty nearly with the founding of the Roman Empire and its first few decades. I suspect the correlation is not entirely coincidental. 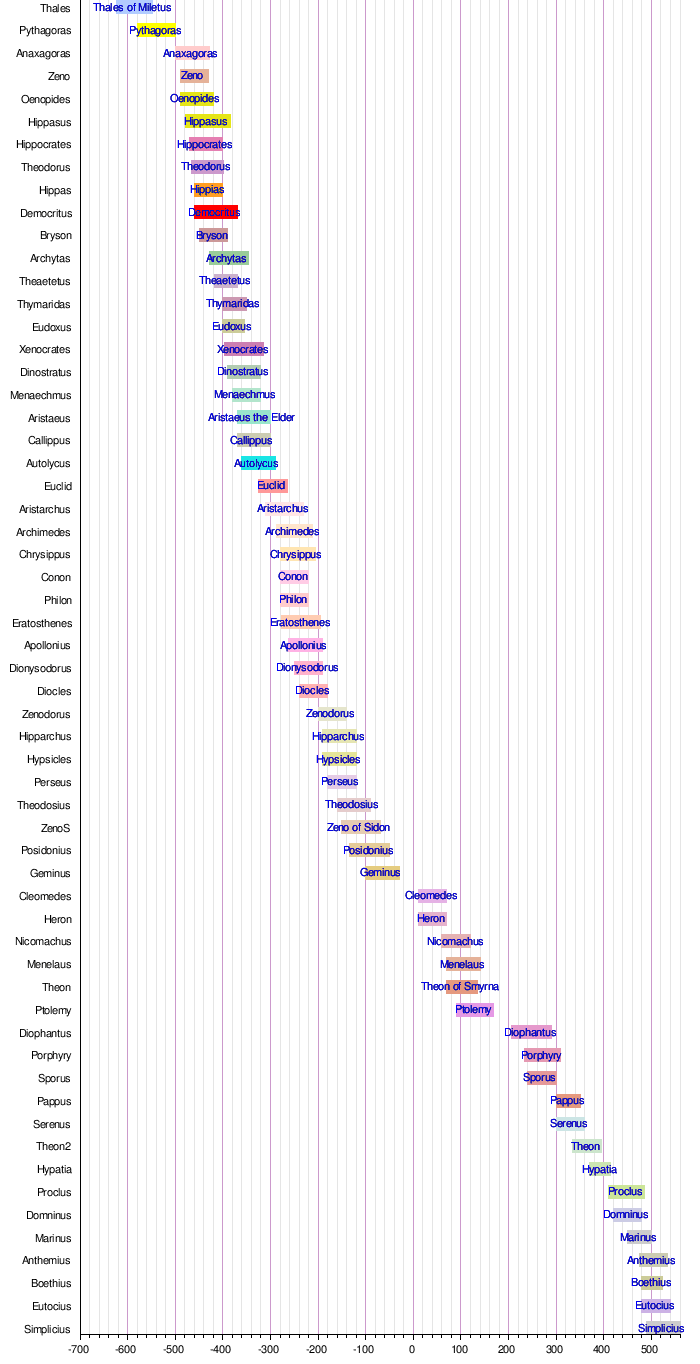 The early dark ages, from 535 to 600 is pretty sparse, because a catasthrophic volcano eruption overturned societies everwhere. You expect that with climate change.

In the year 146 BC, Rome annexed Greece. In the year 31 BC, Egypt had the same fate (and with that the great Alexandria!). The Platonic Academy was closed in the year 529 AD.

Basically: wars and religious tensions destroyed the environment in which Greece had developed so much knowledge. The Romans wanted only "practical" knowledge, and much of the mathematics of the Greeks had been developed for its own sake...

It was only in the 16th century that people continued from the legacy of the Greeks (only fragments of it had survived). The Arabs had translated some works of the Greeks, that were then translated to Latin... The Renaissance started in Italy, and then it went to Poland, Germany, France and England.

Never again let people discard what is "not practical" or not "used in everyday life" like the Romans did.

Not the answer you're looking for? Browse other questions tagged math-history or ask your own question.

22
Difference between calculus and analysis
11
how exactly did calculus change our understanding of the world?
7
Mathematics Essence
33
Is mathematical history written by the victors?
7
How did Kurt Gödel's Incompleteness Theorem affect the mathematical world?
0
History of Mathematical Formulas
15
No rigorous proofs from 200 B.C to 1870?
63
Good “history of mathematical ideas” book?
3
Mathematical Math History books?