Which mathematical game or puzzle did you invent?

A couple of weeks ago, a friend of mine showed me a extension of a game we are all familiar with that he was working on. The game we know is called Tic-Tac-Toe, and he was working on his own version of the game called "Extreme Tic-Tac-Toe" (I think "Tic-Tac-Tics" or "Tic-Tactics" is a more suitable name, but he disagrees).

Here is how it works. The game is played in a grid with 9x9 = 81 tiles. When the game starts, player X may start the game anywhere on the field. This is an example of a valid first move: 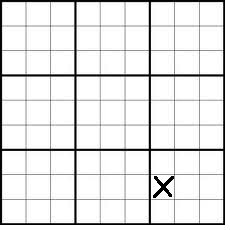 Notice that player X has decided to start in the bottom right 3x3 subfield. Within this subfield, he placed his move on the middle-left.

Thanks to the placement of the move in the midle-left of this 3x3 subfield, player O has to play within the middle left 3x3 subfield of the whole field. An example of a valid first move for player O would now be: 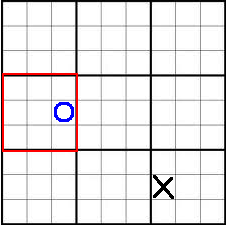 When a small subfield is wone by some player, the whole subfield is marked with an X or an O, according to the player who wins. When some player wins three subfields in a row (vertical, horizontal or diagonal) s/he wins the game!

I really like this extension of Tic-Tac-Toe. It's a lot more exciting and requires more insight and tactical play.

However, this game may have never become more widely known if I had not shared this post with you. Therefore, I am curious which other mathematical games or mathematical puzzles you or someone you know have invented, but did not care to publish or share yet with the world (by creating software to play the game, for example, or by publishing an article about it) for some reason.

So, to summarize. Here are the questions:

Moderators, please don't close this question. It is intented as a big-list community wiki question. I would like to give people an opportunity to share their ideas with regards to this topic.

For your amusement, I submit the puzzle "Gerryomino". The name is a combination of the words "gerrymander" and "polyomino".

Take a $5 \times 8$ array of squares and randomly place an X in several squares. (24 is a good number). Now, try to partition the array into pentomino pieces so that as many pieces as possible have three or more Xs.

Perhaps unsurprisingly, one of the first abstract games I ever created was also a variant of Tic-Tac-Toe which I simply called Rows-of-3, where there is an $n \times n$ board with odd $n \ge 5$ and players also take turns to mark an unmarked cell with their symbol, but the goal is not to get just one row-of-3 as in Tic-Tac-Toe, but more rows-of-3 than your opponent, where rows-of-3 are allowed to overlap. Since the first player has an advantage, the second player is given a 'handicap', which I guess should be around 2. I gladly invite anyone to find the correct handicap so that perfect play will result in a draw. =)

For example here is a sample ending board state where the X-player went first:

The first player has 6 rows-of-3 while the second has 4, so with the handicap of 2 it is a draw. But it's been years since I played this game so this probably isn't perfect play.

Not the answer you're looking for? Browse other questions tagged recreational-mathematics puzzle game-theory big-list or ask your own question.