Historic proof of the area of a circle

The area of a circle radius $R$ is $\pi R^2$ which is quite easy to prove with integral calculus.

But calculus is a relatively new tool, while the area of a circle has been known for what I presume since Archimedes at least. So what is the historic derivation for this?

I think it is something related to the method of exhaustion which is in essence a primitive form of integration, the Wikipedia article states

I am unclear as to how Archimedes would have proved that these two definitions of $\pi$ are in fact equivalent and refer to the same constant. Maybe in his proof of $\pi r^2$ the equality emerges but I have been unable to find any reference to or a description of how Archimedes proved this.

I don't know what to tag this, apart from reference request, so feel free to re-tag.

From the Wikipedia article Area of a disk: 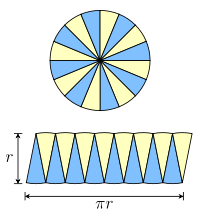 Once you know the circumference of a circle with radius $r$ is $2\pi r$, you can use what is described in the image to approximate the area of the circle by a parallelogram with height $r$ and base $\pi r$.

The proof is straightforward.

1) You need to know that similar figures have constant ratios between corresponding lengths, so call the ratio between a circle's circumference and its diameter $\pi$. In other words, the circumference $= 2\pi r$ where $r$ is the radius (half the diameter).

Your question quotes a text on Archimedes: 'Archimedes used the method of exhaustion as a way to compute the area inside a circle by filling the circle with a polygon of a greater area and greater number of sides.' Regardless of how he originally did it, here is how it can be done now for the unit circle using more modern techniques. Start with the formula for the area of a regular polygon: $$A=n\sin\left(\frac{1}{2}\frac{2\pi}{n}\right)\cos\left(\frac{1}{2}\frac{2\pi}{n}\right)=\frac{1}{2}n\sin(\frac{2\pi}{n})$$ where $n$ is the number of sides. Since the circumference $C = nL$ where $L$ is the side length we have: $$A=\frac{C/L}{2}\sin(\frac{2\pi}{C/L})$$ and since for the unit circle $C=2\pi$ we have: $$A=\frac{2\pi}{2L}\sin(\frac{2\pi L}{2\pi})$$ $$A=\pi\frac{\sin(L)}{L}$$ If $L\rightarrow0$ (because $n\rightarrow\infty$) we have $A=\pi$. Non-unit circles can of course be analyzed with a simple modification of this technique. I haven't seen this proof in exactly this form before but some of the credit must go to Friedrich Philip (see here) who pointed out that the $sin(x)/x=1$, $x\rightarrow0$ result may be relevant. This proof can be seen as an improvement to the argument used here in section 4.2 of the Tau Manifesto. For a proof of the $sin(dx)/dx$ result see here.

Not the answer you're looking for? Browse other questions tagged geometry reference-request math-history or ask your own question.

1
Radius of the circle with area equal to the given square
3
How to find area of a circle using a regular polygon?
3
Area of square reduced to circle.
1
What is the area percentage of a ⌈square in a circle? What is the area percentage of a ⌈circle in a square?
1
Portion of square area within a circle
2
A white square has a red circle inscribed in it, which has a white square inscribed in it, and so on. Find the red area
11
Find the area of a circle part of which is in a square
3
Maximizing Area of two squares in a circle