Derivation of the formula for the vertex of a parabola

I'm taking a course on Basic Conic Sections, and one of the ones we are discussing is of a parabola of the form

My teacher gave me the formula:

as the $x$ coordinate of the vertex.

I asked her why, and she told me not to tell her how to do her job.

Is there a purely algebraic or geometrical yet elegant derivation for the $x$ coordinate of a parabola of the above form?

Already so many answers, but I haven't seen my favorite one posted, so here's another.

The vertex occurs on the vertical line of symmetry, which is not affected by shifting up or down. So subtract $c$ to obtain the parabola $y=ax^2+bx$ having the same axis of symmetry. Factoring $y=x(ax+b)$, we see that the $x$-intercepts of this parabola occur at $x=0$ and $x=-\frac{b}{a}$, and hence the axis of symmetry lies halfway between, at $x=-\frac{b}{2a}$.

By the vertex I assume you mean the minimum/maximum point of the parabola. Indeed, this result can be discovered easily through a bit of calculus, but there is also a simple purely algebraic way, which I will present here.

We now complete the square on this formula.

Now, depending on whether a is positive or negative, the parabola given by y will either have a maximum or minimum. Since a and k are fixed, this must occur when $(x + b/2a)^2$ is zero (we know it cannot be less than zero, and it can extend to infinity).

Parabolas of the form you described (y = ...) are symmetric over a vertical line through their vertex. Let's call that line x = k. This means that if the graph crosses the x-axis (meaning that $ax^2+bx+c=0$ has real solution(s)), they must be equidistant from x = k, so (k,0) must be the midpoint of the segment with endpoints at the zeros of the quadratic or k is the average of the zeros. From the quadratic formula, the two zeros of the quadratic are $\frac{-b\pm\sqrt{b^2-4ac}}{2a}$, so their sum is $-\frac{b}{a}$ and their average is $k=-\frac{b}{2a}$. So, the x-coordinate of the vertex must be $-\frac{b}{2a}$.

An alternative approach, which isn't necessarily the best in and of itself, but stick with me ...

We can find the point of tangency (the vertex), then, by using algebra to determine when the intersection of our parabola and line equations have a single solution.

We begin with the standard find-the-intersection strategy, setting our formulas for $y$ equal:

When does this equation have a single solution for $x$? Let's see. Rearranging and invoking the Quadratic Formula, we have:

Now, when the stuff under the radical matters, then we have either 2 or 0 values of $x$: two values if the stuff is positive (the square root gives a quantity to add and subtract from $-b$); no roots if the stuff is negative (the square root gives an imaginary number we can't use here). We'll have our sought-after single value of $x$ when $d$ is whatever-it-has-to-be (its exact value doesn't matter) to make the stuff under the radical becomes zero, making the radical term vanish; when that happens, our value of $x$ falls out as

With this approach, however, we can consider a more sophisticated situation. It may be somewhat advanced for your class, but --if you can make sense of my rambling-- you can use it to blow your teacher's mind. :)

(Before we begin: I wouldn't necessarily recommend this exploration for every student just beginning to learn about parabola equations. However, I think having it "in the archive", as it were, can be worthwhile for people who come across the question to see that the answer can lead to some interesting places.)

We ask ourselves this question:

What if we tilt the line?

That is: What can we say about the $x$-coordinate of the point of tangency where the parabola is touched by a line with slope $m$?

As before, we set our formulas for $y$ equal to each other ...

... then rearrange and invoke the Quadratic Formula ...

And as before, we don't really care about the complicated mess that "$stuff$" might be, since we're only interested in the situation where it goes away anyhow.[*] Once the radical term vanishes and the dust settles, we have this:

For the parabola described by the equation $y = a x^2 + b x + c$, the $x$-coordinate of the point where a line of slope $m$ lies tangent to the curve is given by

Here's the kicker that your smart friend[**] can appreciate: That statement really is a fact that most people don't see until Calculus. Except there, the issue tends to be phrased a little differently: It's not about finding the $x$-coordinate of the point-of-tangency based on a given slope, but about finding the slope of the line based on the $x$-coordinate for the point-of-tangency. So, we re-phrase the above equation to yield $m$:

You'll be way ahead of the game if you can see a neat way to get directly from the parabola equation to the slope formula. I'll give you a hint by showing how the formula fits in with a couple of facts you already know about the slopes of lines, and show you one step further, with a few unnecessary zeros thrown in:

[*] Actually, you should care enough to convince yourself that you can find a value of $d$ that makes "$stuff$" go away, but for now you can trust me that such a $d$ exists.

[**] Keep in mind that "smart" doesn't always mean "having the right answers"; just as often, it means "asking the right questions". The fact that you chose not to accept a formula blindly and asked your teacher "why" --and then steadfastly continued your quest for an answer when she wouldn't provide one-- suggests to me that your smart friend has a smart friend, too.

Here is the simplest way I know, using a bit of algebra. Starting with Isaac's observation that the vertex lies on the axis of symmetry, the line x = k. Question is, what's k? That's your answer.

Then the symmetry around x = k means that, for any h

From that, just multiply it all out and some simple additive cancellation gives

h cancels out, and a bit more algebra gives

To really complete this, however, we should show that x = k = -$\frac{b}{2a}$ is a maximum or minimum point. Again, with more algebra:

And likewise when a < 0, x = k is a maximum. This also shows the symmetry around x = k, and how the coefficient a determines whether the curve is concave upward or downward.

In particular, this shows you why the shape of the graph is the same regardless of the values of $a,b,c$ as long as $a\ne0$.

I like Americo's answer using translation of y = ax^2. But to finish it, we should at least note that ax^2 has a maximum or minimum at <0,0>, which is quite obvious, and that translation preserves order and therefore maxima and minima, which is pretty easy.

The vertex of a parabola is the point on the axis of symmetry that intersects it (Wikipedia).

Echoing Americo's and Isaac's answers, but without appealing to the quadratic equation:

First treat the special case f(x)=ax²+d (i.e. no "x" term); by remembering that the line that divides the parabola symmetrically passes through the vertex, and is in fact the y-axis (x=0), we see that 0 is the abscissa of the vertex.

To treat the more general f(x)=ax²+bx+c, we try a substitution of the form x=x'-h (geometrically, this corresponds to translating your coordinate system horizontally by h units). Expanding this, you will get something like a(x')²+(2ah+b)x'+(constant term). To go back to the special case we first treated, we find the value of h such that the coefficient of x' is 0. Thus you obtain the expression for the vertex's x-coordinate.

There are nice answers already but I would like to add another way to look at this:

This leads to an interesting question about what happens when the parabola does not have real roots.

for parabola written in Vertex Form vertex is (h,k).

Lots of interesting answers here. Might as well make it an even dozen. :-)

Now just expand the right-hand-side and solve for y. You end up with:

Now you can easily convert back & forth between Standard Format and the other.

It could be argued that the parabola is symetric respect to the vertical line passing through the vertex point. So, the vertex is located in the midpoint between the two roots of $y=0$.

Note that this demonstration is also valid even when there is no real roots for $y=0$ (which is the case when $b^2 < 4a c$), since the complex terms in the last equation are mutually canceled.

Sketch of the parabola: 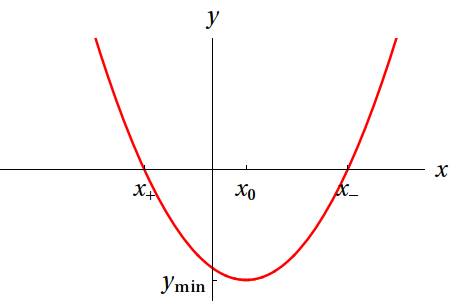 I'll add to David Lewis' answer in more detail (for those who are looking for the full derivation!):

Not the answer you're looking for? Browse other questions tagged algebra-precalculus analytic-geometry conic-sections plane-curves or ask your own question.

0
Vertex of a parabola without calculus?
0
Finding the symmetry point in a quadratic graph
38
Why do differentiation rules work? What's the intuition behind them? (Not asking for proofs)
4
What is wrong with this method for a rotated and shifted parabola?
1
Maximize the product of two integer variables with given sum