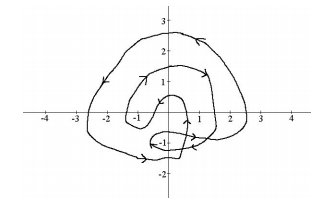 My shakiest solution is the winding number for $z=-1$. For some reason, I have a competing thought that the winding number is in fact zero. In my head, I figure I'm free to "move" the knot around $z=-i$ and "unfold" it to get a figure that does not wind around $z=-1$ at all. Informally, I think of the curve as a rope where the intersections are actually a part of the rope lying on top of another part. I hope that is not too unclear.

This was achieved by Kronecker in 1869.