How many squares actually ARE in this picture? Is this a trick question with no right answer? 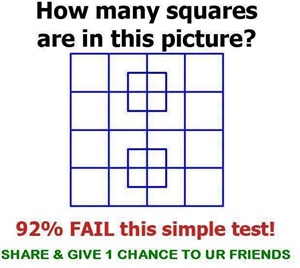 I counted $16$ whole squares ($4$ going down on left side, $4$ going down on right side, $8$ small squares in the centre). With this method the answer could also be $17$ if you want to count the entire shape as one big square.

I can also see the answer being $24$ if you count the smaller squares separately, as if they were floating above the main grid instead of intersecting with it.

Is there a right answer, or is it possible that there is no 'right' answer and it just depends on your counting method?

Thanks to Ross Millikan for helping me to find the last squares. Here is an GIF animation (344 kb) showing 40 squares from biggest to smallest:

The grand total is then $40$ squares.

Additionally, there are $2$ small squares in the middle along with 4 even smaller squares each. They total to $10$ squares.

Generally speaking, most puzzles that are written are intended to be answered using the minimum number of assumptions possible to arrive at the correct solution. William of Ockham first stated this principle as a guideline, commonly known as Occam's Razor. The exceptions to this principle are those that are trick questions, which are usually worded in a way that suggest that the immediately obvious answer isn't correct, or appear as an optical illusion of some sort.

Even questions that are trick questions generally have one correct answer; we can arrive at the suitable solution by way of Occam's Razor as well. The types of problems that we are given in school textbooks, for example, all abide by Occam's Razor; the intent is to prove critical thinking and analysis skills, not "thinking outside the box" skills (a sad truth, really, as we'd do much better as a society if the latter were true).

This puzzle, and others along the same vein, are generally meant to invoke critical thinking; find the correct answer with the minimum number of assumptions necessary to solve the problem. The question is asking is to find the number of squares, a square being defined as a closed object with four sides, with each side meeting at 90 degree angles, and each side being the same length.

For example, this Stock Photo shows a square window; it's mentioned as such in the description. The fact that it contains four smaller squares is irrelevant here; most people will naturally state that this is a square window (note, I didn't actually measure it, so it may not be perfectly square, but it appears as such, and we'll take it at face value for purposes of this discussion). This window actually has five squares; the frame plus the four smaller squares from the lattice that reinforces the glass.

Since the question doesn't state that any of the squares are floating or are in any other way special, and since the question also doesn't appear to be an optical illusion, we can apply Occam's Razor to come up with the obvious solution.

Using Occam's Razor, we can state the following "truths" about this image:

Assuming that this question isn't an optical illusion, which it clearly does not appear to be, the obvious solution to the question is 40. We arrive at this answer by enumerating all of the squares of various sizes and adding them together.