The following is a geometry puzzle from a math school book. Even though it has been a long time since I finished school, I remember this puzzle quite well, and I don't have a nice solution to it.

So here is the puzzle:

The only solution that I know of is to use the sine formula and cosine formula several times. From this one can obtain a numerical solution. Moreover this number can be algebraically shown to be correct (all sines and cosines are contained in the real subfield of the 36th cyclotomic field). So in this sense I solved the problem, but the solution is kind of a brute force attack (for example, some of the polynomials that show up in the computation have coefficients > 1000000). Since the puzzle originates from a book that deals only with elemetary geometry (and not even trigonometry if I remember correctly) there has to be a more elegant solution.

The solutions are not as trivial as one would expect from the statement. It's called Langley's problem of adventitious angles first posed in The Mathematical Gazette in 1922.

Check out An Intriguing Geometry Problem by Tom Rike.

Here is the solution I had for this (I had the writeup lying around in an old email I had sent regarding this, so, no tex, also, A and B are interchanged): 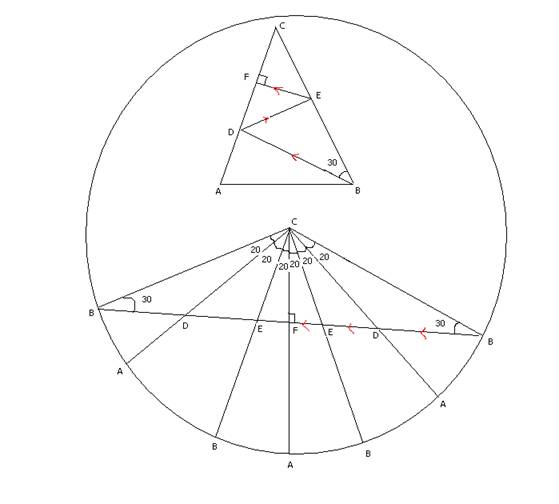 We can see that an $80-80-20$ triangle is nothing but a part of the triangulation of an $18$-sided regular polygon, whose $6$ triangles are shown in the the bottom part of the circle above.

We can show that the ray will reflect twice (first at $D$ then $E$) and strike at a $90$ degree angle the third time ($F$) i.e. after $5$ reflections, the light ray will return back to the vertex!

This reflection process can be pictured in another way, by reflecting the triangle each time instead of reflecting the ray (see the red arrows in the $6$ triangles in the bottom part).

Now the point of the third reflection $F$ (i.e. the $90$ degree incidence point) is exactly the midpoint of the side on which the ray is incident on. This can be seen by considering the bottom part:

Note: To get more context about what $x$ and $y$ are, this was the figure when the problem was shown to me: 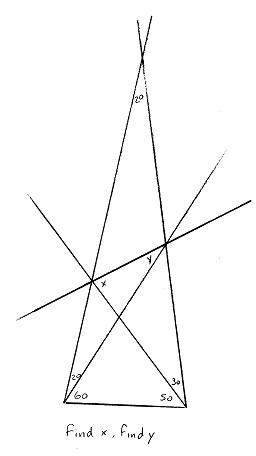 I have written four distinct solutions to this problem: $$Solution Number 1:$$ 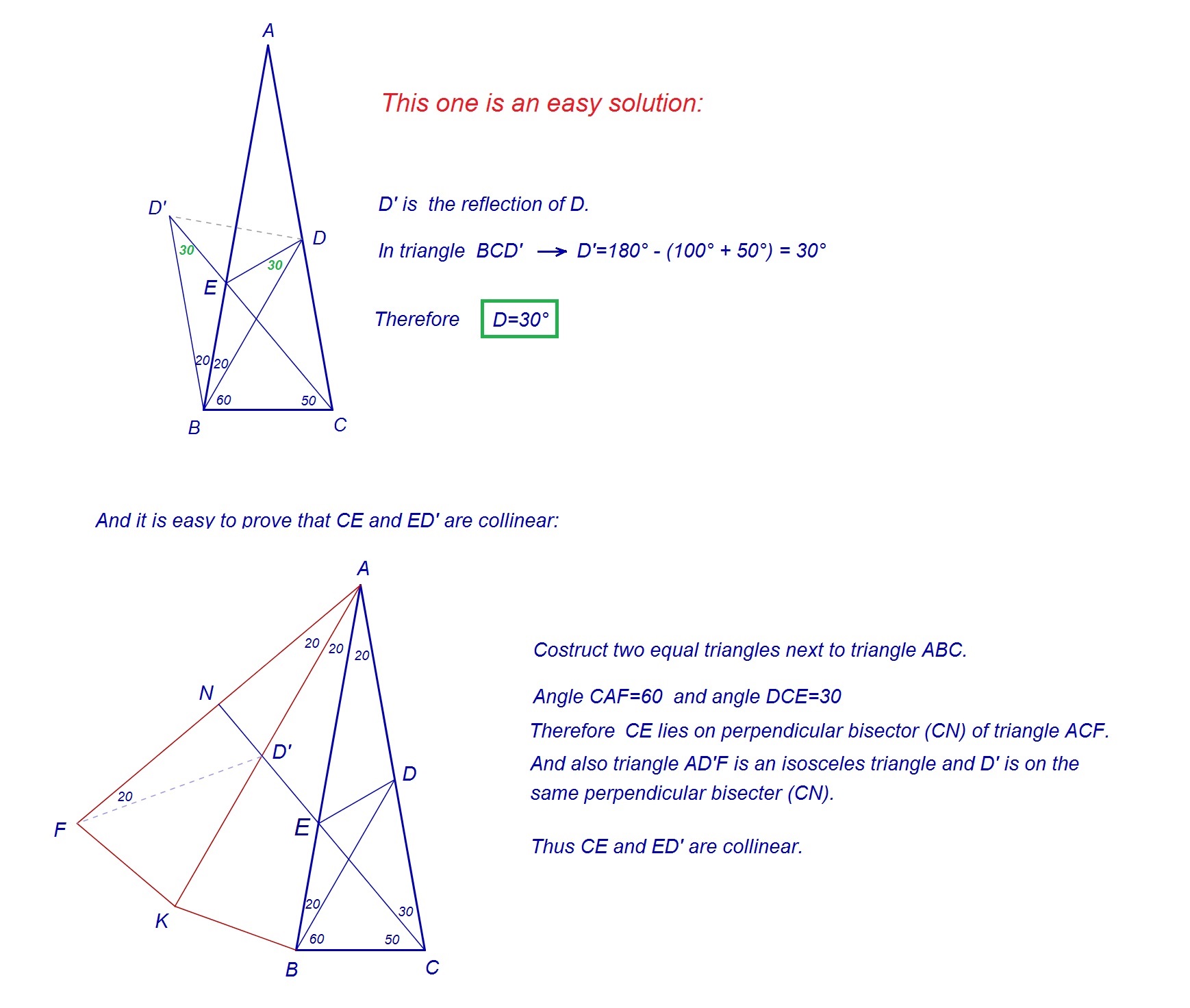 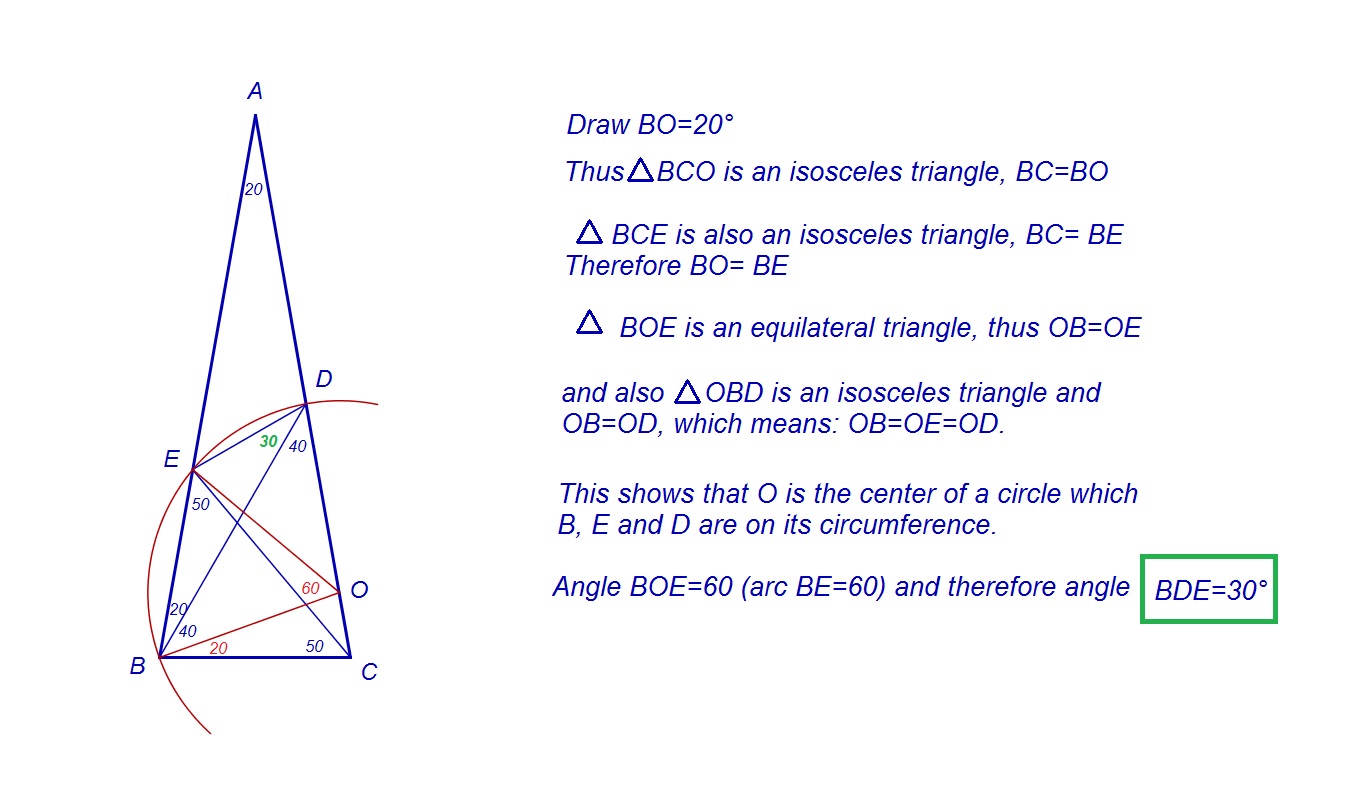 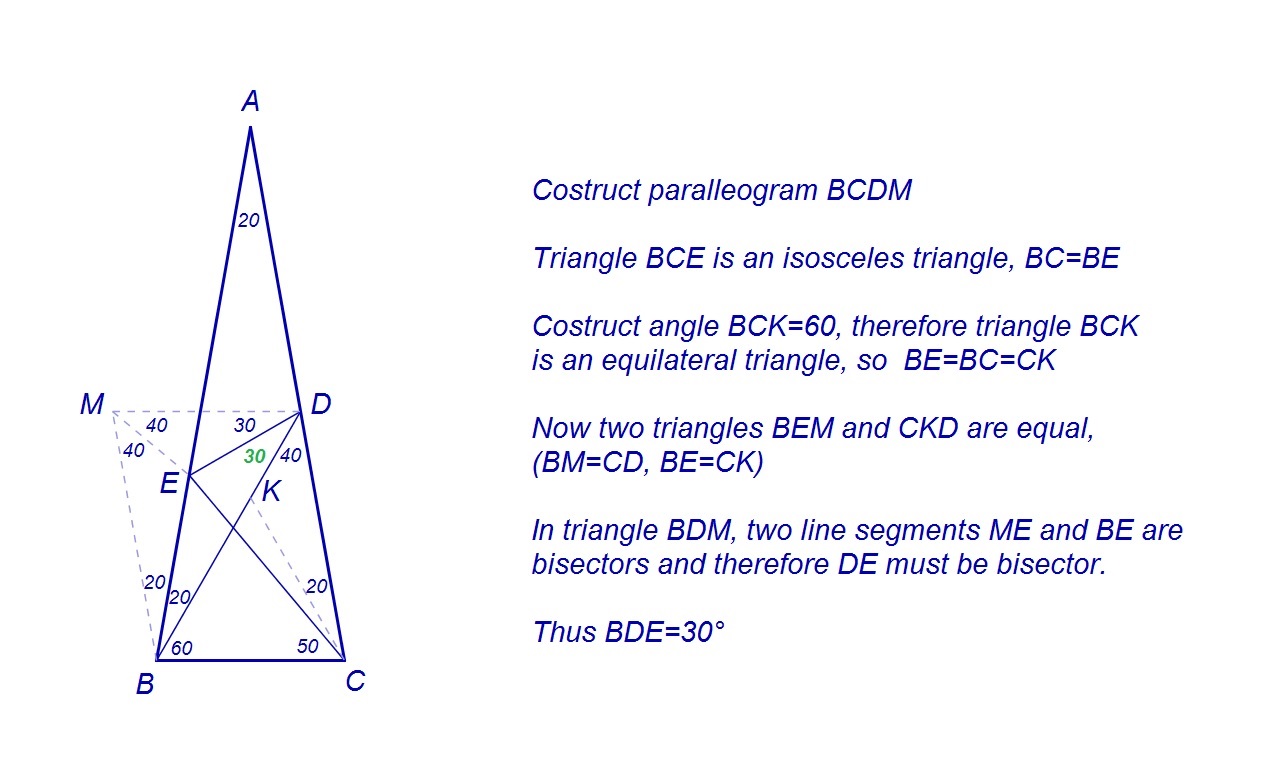 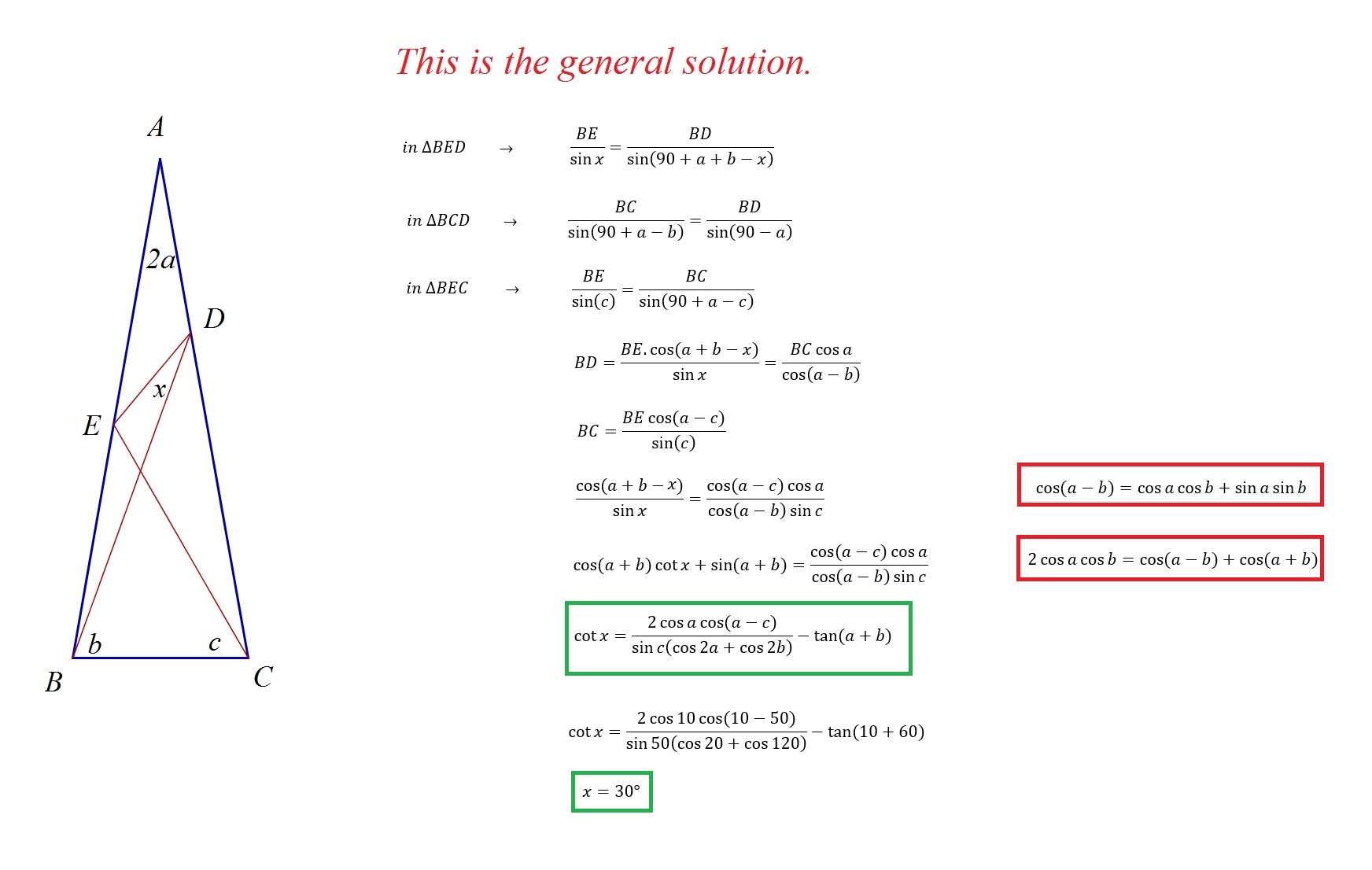 This is the easiest solution. Don’t search for another.

Any other solutions(advice) are welcome.

2
How to get the angle of the figure?
1
Is this geometry problem uniquely solvable?
2
Finding an angle in a $80^\circ$-$80^\circ$-$20^\circ$ triangle (variant involving $70^\circ$ and $60^\circ$)
2
What is the value of $\angle BMN$?
3
Three old chestnuts in elementary geometry: is there a unified perspective?
2
What is the value of $\angle x$
2
Geometry/Trigonometry Determine angle in a Triangle
2
Difficult elementary triangle problem, and generalizations
0
Determinating the angle in a triangle
0
Fourth grade geometry problem
See more linked questions

56
A discrete math riddle
3
Proof involving an isosceles triangle
6
Intersection of 8 spheres: find the volume
2
parallelogram diagonals in a relationship with basic geometry
4
Find the two missing angles in a quadrilateral
1
Find the value of angle x (Langley's Adventitious Angles variant)
0
What angle must two equal length lines be at, s.t. a line from the open endpoint of one, to the midpoint of the other reflects to the other midpoint?
1
How to find the centre of the circle that inscibes an isosceles trapezoid?