This is a fairly old answer of mine with a proof that was not very motivated, so I thought I'd update it with some geometric intuition about convexity.

Consider for simplicity the two-variable case $(a+b)/2 \ge \sqrt{ab}$ and fix, say $a = 1$. The plot of $(1+b)/2$ and $\sqrt{b}$ show intuitively how the concave nature of the geometric mean implies it will always lie below the arithmetic mean. Also observe the equality at one point. In fact, this concavity will extend to any number of variables, but obviously a plot is not a proof. 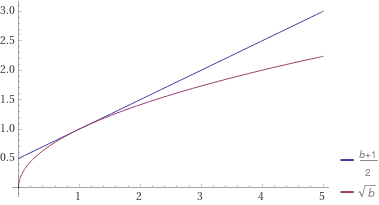 Taking logs preserves the inequality since $\log$ is an increasing function:

Using the concavity of $\log$, by Jensen's Inequality (proved inductively starting from the definition of convexity), the inequality holds. 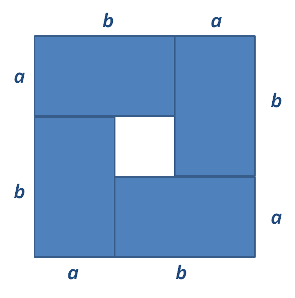 And it is obviously true.

(P.S.: we can use the same technique of transfinite induction from here too!)

Another answer. We can prove this alternative result:

That way, we can always increase the sum whenever there are at least two different terms. The only way it can't be done is if all terms are equal; and this is the supremum value.

It now suffices to show "If a $P_{k+1}$ holds, then $P_k$ must hold". [Informally, we showed we can jump to powers of $2$, but there are gaps so now we are trying to show we can also take single steps backwards]. So we'll try to prove this:

17
Combinatorial proof of arithmetic geometric mean inequality
3
$\sum a+b+c \sum \frac{ab+bc+ca}{a+b+c} \sum \frac{abc}{ab+bc+ca} \leq \sum a \sum b \sum c$
8
Proof of the Barrow's Inequality?
8
Elementary theorems with several proofs?
5
Is there a proof of the AM-GM Inequality via Cauchy's Inequality? Or vice-versa?
2
Determining whether proofs of the Pythagorean theorem are essentially the same, or essentially different
2
How to prove Ky Fan Inequality using Forward-Backward Induction?
5
Proving extended AM-GM inequality using a monotonic function
2
Jensen inequality for probability measure
0
Jensen's inequality for strictly convex functions and the case of equality