This may sound like a dumb question, but does $\sin(5x)=5\sin(x)$? Can you say this for any trigonometric function if it is true (e.g. can $\tan^{-1}(7x)=7\tan^{-1}(x)$). Again, I am pretty sure I am wrong, but I am just wondering for my future work on trigonometry. If they are not equal, then please tell me what the difference is between the two. Thanks!

Note: I have not had much practice with trigonometry, so please do not answer with some kind of complicated Taylor Series thing (I have heard about it, but don't fully understand it). Thanks again

I'll try to explain the difference between the two with a picture: (Apologies ahead; it's a rough sketch done in Microsoft Paint.) 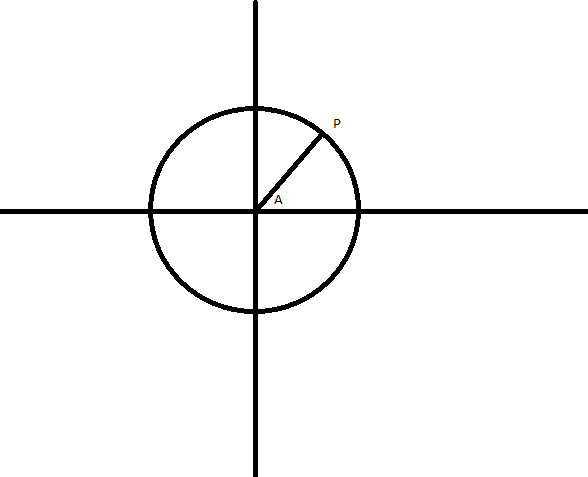 To get $\sin(5A)$, this time we don't blow the circle and the line bigger. Instead, we're rotating the line around the center of the circle so that the angle it makes with the $x$-axis is 5 times bigger. Now, the $y$-coordinate of the point where $l$ meets the edge of the circle is $\sin(5A)$.

Try it out with an example or two; you'll see the difference yourself.

The best way to observe it is to look at a graph and to see what it does: http://www.wolframalpha.com/input/?i=plot+sin+x%2C+sin+3x%2C+3*sin+x

I suggest playing around with other values in the graphs to see what they do.

1) You could have just plotted the functions in, e.g., wolfram alpha and see for yourself.

Something like $a\cdot f(x)= f(a\cdot x)$ is true if and only if $f(x)$ is linear. Since there are always nonlinear terms in the Taylor expansion of a trigonometric function this can't be true for any.

Both of the equalities that you wrote above are NOT true. One way to look at this might be to use their Taylor series expansion. $\sin (5x)$ means the sine of $5$ times an angle measure $x$. This means in a right triangle whose hypotenuse is of length $1$, the perpendicular corresponding to the acute angle $5x$ has length $\sin (5x)$.

While for $5 \sin x$, one should consider a right-triangle with hypotenuse of length one and the perpendicular corresponding to an acute angle $x$ and then take $5$ times the length of this perpendicular.

You can draw some such right triangles to verify the results yourself.