Why the term and the concept of quotient group?

The basic concept of Quotient Group is often a confusing thing for me,I mean can any one tell the intuitive concept and the necessity of the Quotient group, I thought that it would be nice to ask as any basic undergraduate can learn the intuition seeing the question. My Question is :

I understood the Notion of Cosets and Quotient Groups,b ut I want a different Perspective to add Color to the concept. Can anyone tell me the necessity and background for the invention of Quotient Groups?

Note: I tried my level best in formatting and typing with proper protocol,if in case, any errors still persist, I beg everyone to explain the reason of their downvote (if any), so that I can rectify myself, Thank you.

Why would we want do this, as it amounts to loss of information? Well, there are several reasons. Sometimes we are only really interested in the residual information. For example, when we study the set of numbers of the form $a+b\root 3\of 2+c\root 3\of 4$, where $a,b,c$ are integers, and we want to start adding, subtracting and multiplying them, we quickly notice that those operations are very similar to the corresponding operations involving polynomials $a+bx+cx^2$. The difference is that we are only interested in the value of the polynomial at a single point $x=\root 3\of 2$. This shows in the multiplication rule, because the polynomial $x^3$ takes the value $2$. In order to make this correspondence between polynomials and numbers more accurate we are forced to equate the polynomial $x^3-2$ with the polynomial $0$. This time we get a quotient ring instead of a quotient group (see algebra textbooks for such details), but the idea is that some things we have learned about polynomial algebra will carry over to our set of numbers, and that gives us the benefit of economy of thinking. We don't need to relearn everything from scratch, if the next time we are interested in $\root 3\of 3$ instead.

Sometimes quotient groups are forced upon us. We are not in possession of all the information. A simple example is the following. Assume that somebody is counting coins, but the only counting aid available to him is a light switch. Every time he tallies one more coin he will toggle the light switch: lit, dark, lit, dark,... He may or may not be able to keep track of the actual tally, but if somebody else comes to the room, or the tallyman gets confused, the status of the light switch will only tell whether an odd or an even number of coins have been counted, i.e. we have moved from the group $\mathbf{Z}$ to the quotient group $\mathbf{Z}/2\mathbf{Z}$. Another very common quotient group in mathematics is used to decribe an angle of rotation. Let's say that we are studying a planar object spinning about its center of mass. It may have completed God knows how many full revolutions, but when we enter the room and observe its position, we have no way of knowing anything else but the current direction pointed at by, say, a small arrow somebody painted on the object for this purpose. A full revolution corresponds to an angle of rotation $2\pi$, so the total angle of rotation will have an uncertainty that can be any integer multiple of $2\pi$. In other words, we can only see an element of the quotient group $\mathbf{R}/2\pi\mathbf{Z}$, not an element of $\mathbf{R}$.

Quotient groups $A/B$ count cosets of $B$ inside $A$. The counting even works well with addition.

The Cartesian plane forms a group A, and a line through the origin is a subgroup B. The cosets of B inside A are all the parallel lines. How many are there?

In a sense, the quotient group is indeed a measurement of how many copies of your normal subgroup are within the larger group. In the simple example of $\mathbb{Z}/3\mathbb{Z}$, the group has three elements: one for the subgroup $3\mathbb{Z}$ itself and one for each of its two cosets, which, if you were to plot them on a number line, for example, "look" the same as the original subgroup. And if you put the subgroup and its two cosets together, you get the whole group $\mathbb{Z}$. So in a sense the quotienting in this case tells you how many subsets resembling $3\mathbb{Z}$ are needed to break down $\mathbb{Z}$. The thing that makes this different from arithmetic division, of course, is the fact that the quotient is also a group--the group structure just comes from the way the "copies" of the subgroup interact with each other.

Two of the most basic concepts in mathematics, namely "Sets" and "Relations" are much useful to create new things from old. For example, "integers" can be constructed from natural numbers by putting an equivalence relation on the set $\mathbb{N}\times \mathbb{N}$ (see Concrete Abstract Algebra: Niels Lauritzen), rationals can be constructed from integers by putting an equivalence relation on $\mathbb{Z}\times \mathbb{Z}$; in some way reals, complex numbers can also be constructed. The only things we have used are "Sets and Equivalence Relation".

In this way, we can think of quotient group of a group $G$ as a set of equivalence classes of group $G$ with a natural binary operation, induced from that of $G$:

(So we have constructed a new set using equivalence relation and trying to put a binary on it) The necessary (and sufficient) for this map to be well defined (hence binary operation) is that $H$ should be normal subgroup of $G$. Once we convince for it, it is easy to verify other conditions in the definition of group. The new group is called as quotient group of $G$ by $H$ (denoted $G/H$)

Therefore, the quotient group of a group by normal subgroup is a set of equivalence of classes of $G$ with a natural binary operation, induced from $G$

Quotient groups $A/B$ count cosets of $B$ inside $A$. The counting even works well with addition.

The Cartesian plane forms a group A, and a line through the origin is a subgroup B. The cosets of B inside A are all the parallel lines. How many are there?

https://math.stackexchange.com/a/69063/53203 mentions that the quotient subgroup is a type of subgroup but "with less information".

This is also where my intuition lies, but I would like to make that a bit more precise by uttering the key missing keyword: "homomorphism". This is going to be a more focused subset of this other answer: Intuition behind normal subgroups

An isomorphism is a bijective function between two groups (of the same size since it's a bijection) and means that they are the exact same as far as the group structure is concerned. Pretty boring.

An homomorphism however does not have to be a bijection, only surjection: it can take a larger group and transform it into a smaller image group. Notably, several distinct inputs can map to the same output.

Now, as I have explained in more detail at: Intuition behind normal subgroups:

by the fundamental theorem on homomorphisms, there is a one to one relation between homomorphisms quotient groups (or normal groups):

Therefore, the quotient group is always the result of a simplification done by an homomorhpism.

I like this intuition, because it is very easy to understand what an homomorphism is: it is just a function that keeps group structure.

And now we've just seen that every quotient group maps one to one to this thing that is easy to understand. 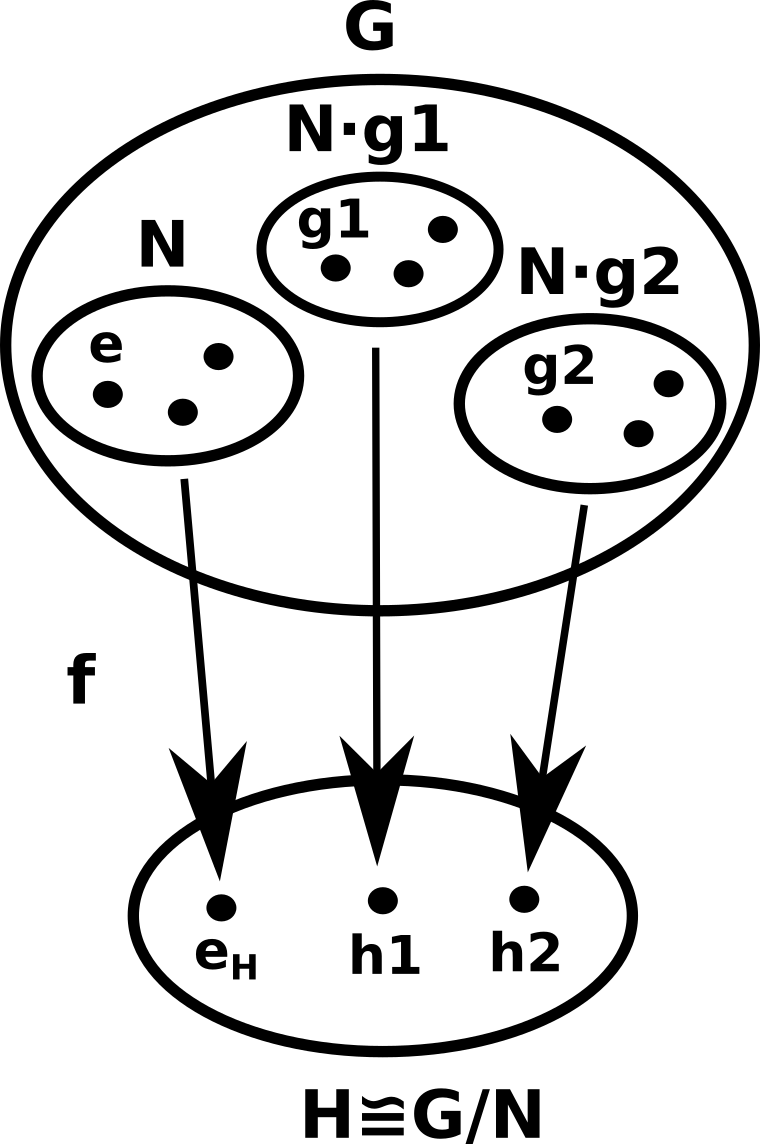 This also makes it clear why the name "quotient" is used: it is because we are splitting the larger group G into two smaller groups:

which gives us a clear analogy to integer multiplication and division.

It is important to note however that this intuition is only valid in the "division sense": because groups multiplication is more complex than integer multiplication (notably, non-abelian), there is no simple known way of "multiplying two smaller groups to recover a larger group".

Not the answer you're looking for? Browse other questions tagged abstract-algebra group-theory quotient-group or ask your own question.

24
Intuition behind normal subgroups
13
Why is the fact that a quotient group is a group relevant?
8
Basic understanding of quotients of “things”?
12
Local-Global Principle and the Cassels statement.
6
Intuition and Stumbling blocks in proving the finiteness of WC group
7
Intuition behind quotient groups?
7
What exactly is the purpose of a coset?
8
Why “normal subgroups occur as kernels of homomorphisms” is a big deal?
2
What does “quotient-ring” mean?
1
What is a good way to think of Factor Groups?
See more linked questions