I was asked to find an arithmetic function $f$ such that $f*f=\mathbf 1$ where $\mathbf 1$ is the constant function 1 and $*$ denotes Dirichlet convolution. I was able to prove that there are two solutions $\pm f$ and that $f$ is multiplicative. Next, I would have to evaluate $f$ at prime powers. I constructed a few values and my conjecture is that $$f(p^n)=\frac{2n-1\choose n}{2^{2n-1}}$$ for $p$ prime and $n>0$. To prove this, I only need to show that

For readers who don't really understand what I'm talking about and who are merely interested in the proof of the identity, you can just start reading from here. 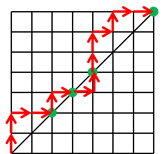 (We do not count $(0,0)$ because the summation doesn't.) However, interpreting the summation like this I can't get any further. Any other ideas or suggestions on how to approach this problem?

Edit: There are some errors in my reasoning above, let's try again.

As in Arthur's comment, it would suffice to find a bijection between all $2n$-monotonic paths (no matter their width or height) and the pairs $(p,s)$ where $p$ is a $n\times n$ path and $s$ an intersection point with the diagonal. Perhaps there is a weird bijection which would then solve the question.

For the sake of a proof with induction, I considered all paths that intersect the diagonal for the first time at $(k,k)$ and all possible continuations and their intersection points, summed for $k$ from $1$ to $n$ using the induction hypothesis and a trick with Catalan numbers. (Writing out the details would be tedious, I think the reasoning becomes clear when you see the sum.)

It turns out to be sufficient to prove

I will prove your edited formula, which is much nicer.

There is a simple solution (two lines) via generating functions. In particular, read the 2nd example which uses convolutions.

Then, the statement claims that

All that is left to do, is to show that

This is obvious / well known.

Anyway given that the expansion $(1)$ is the correct one for that squareroot, and also given that its coefficients match up with the ones you have conjectured, it follows by the way ordinary series multiply that the terms are correct for the Dirichlet square of that part of the product for powers of $p$ to wind up as the ordinary series of $1$ in front of each power.

I realize I'm missing some details as to setting this all up. But I think it interesting that the usual taylor series of the squareroot of $1/(1-x)$ has its coefficients matching your $f(p^n)$, and in one book on analytic number theory I have consulted, such switching back and forth between Dirichlet series and ordinary ones is justified when the given function is prime-independent and multiplicative. I'll add more on this eventually but wanted to enter the answer now in case it's of any immediate use.

Not the answer you're looking for? Browse other questions tagged combinatorics elementary-number-theory summation binomial-coefficients or ask your own question.