I wandered over here from StackOverflow and my understanding of advanced mathematics is limited, so bear with me...

A standard, BINGO game card has 24 numbers arranged in a 5x5 format. The center of the card has a free space. The numbers range from 1 to 75. Each column has 1/5 of the numbers (1-15, 16-30, etc). Every round results in a single number being called. To win, a player must have 5 numbers in a row, column, or diagonal for a total of 12 possible ways to win.

My understanding is that a single player will on average call bingo in 41.36 rounds. See Wizard of Odds.

GOAL: Given a fixed set of players P and a desired number of rounds R, how large should the set of numbers N be?

Example: For 100 players, how large should the set of numbers be for the game to last, on average, 50 rounds?

I've opted for a numerical approach, since the probabilities for BINGO are extremely not obvious. I wrote a Python program which (approximately) answers the question: "How many total numbers do we need to make a game last Nturns given that we have Nplayers people playing?" Note that the number of numbers needs to be a multiple of $5$, otherwise one column would be biased. Since $50$ turns seems to be a good average length for a game, if we just set $R = 50$, I've found an experimental fit for $1\leq P \leq 100$. See this graph: 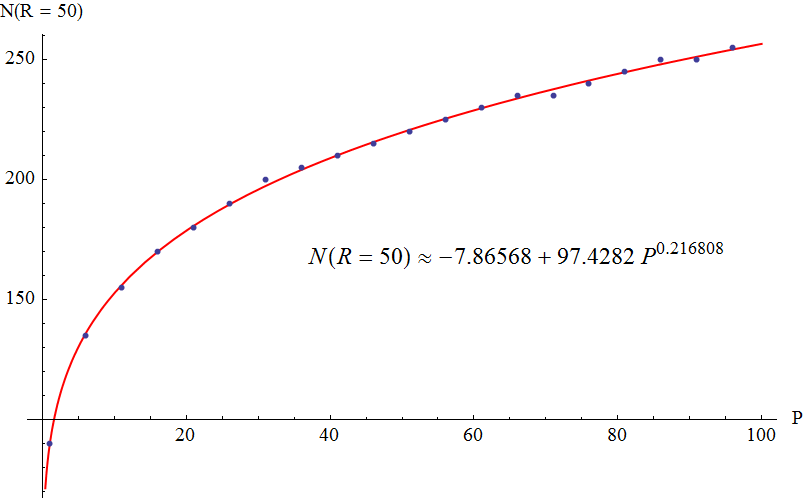 Note that to answer your example question, the model gives $N \approx 256.5$, so we probably need $255$ numbers. Here is the program if you want to compute some results more accurately; simply change the arguments of how_many_numbers(Nplayers, Nturns).

Not the answer you're looking for? Browse other questions tagged probability recreational-mathematics or ask your own question.