Given a cover $\{U_i\}$ of a space $X$ and for each $U_i$ a sheaf $\mathcal{F}_i$ and isomorphisms $\phi_{ij}:\mathcal{F_j}|_{U_i \cap U_j} \rightarrow \mathcal{F_i}|_{U_i \cap U_j}$ satisfying the cocycle condition $\phi_{ij}\phi_{jk}\phi_{ki} = id$, I want to show that there is a sheaf $\mathcal{F}$ on $X$ whose restriction to each $U_i$ is isomorphic to $\mathcal{F_i}$. I understand that $\mathcal{F}(U)$ should consist of tuples $(s_i)$ of sections from the various sheaves, then I need to define restriction maps, prove the presheaf axioms and then the sheaf axioms. I have at least a vague idea of how the proof should go. Unfortunately, on my way to proving the result I get utterly lost in an unholy mess of details, so that even once I "finished" my proof I was nowhere near certain my proof was correct. I've searched around for proofs to examine, but any proof I can find is either lacking many details or required as an exercise.

1) Can someone show me a proof of this result? I am interested to see both a direct proof checking all the details and also a more intuitive proof, possibly appealing to results about gluing morphisms or whatnot.

2) Should the tuples $(s_i)$ be leaving in the product or the disjoint union of the $\mathcal{F_i}(U\cap U_i)$? I thought it would be product, but I saw union on Google Books in Introduction to Singularities and Deformations by Greuel, Lossen, and Shustin.

3) Where does the cocycle condition come into play?

4) How can I prevent all these messy sheaves from deterring me from the beautiful subject of algebraic geometry?

You should really be able to do this directly. The calculations are not messy at all, in my opinion. Also, they are straight forward. It is also a good idea to simplify the notation and to use words more than formulas. This way you really understand what is going on.

The restriction maps of $F$ are induced by the ones for $F_i$. They are well-defined because the asserted compatibility is preserved by restriction, which in turn works since $\phi_{ij}$ commutes with restriction maps. After having checked this, it is obvious that $F$ becomes a presheaf, using the presheaf properties of the $F_i$.

The cocycle condition is not needed to make this construction work. We don't even need that the $\phi_{ij}$ are isomorphisms! This is especially clear in the category-theoretic construction of $F$, see for example Zhen Lin's answer here. 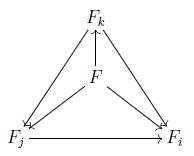 Not the answer you're looking for? Browse other questions tagged algebraic-geometry sheaf-theory or ask your own question.

15
Glueing morphisms of sheaves together - can I just do this?
18
Gluing sheaves - can we realize $\mathcal{F}(W)$ as some kind of limit?
6
Do I correctly understand the constructions involved in definition of Cartier divisor?
2
Small question regarding gluing sheaves
3
image presheaf is not a sheaf
4
Gluing sheaves as direct limit. What is the ordering of this directed system.