Does this “extension property” for polynomial rings satisfy a universal property?

On page 151 of Paolo Aluffi's Algebra: Chapter 0, an important property of the polynomial ring $\mathbb{Z}[x_1, \cdots, x_n]$ is introduced, namely that it's initial in the category of set functions from a fixed $n$-element set $A$ to commutative rings. (Or, to put it another way, a set function $f: A \to R$ with $R$ an arbitrary commutative ring factors uniquely through $\mathbb{Z}[x_1, \cdots, x_n]$.)

After establishing this property, two examples are given; the first, a special case when $n=1$, proves the existence of a unique ring homomorphism $\mathbb{Z}[x] \to S$ sending $x$ to an element $s \in S$ and extending the unique homomorphism from $\mathbb{Z} \to S$. So far so good.

The author then goes on to give a second example:

It is an exercise to provide the details of this construction. It's not hard to show what this map must be and prove that it's unique by "naive" methods, but, given its placement and the pedagogical bent of the text in general, I assume that there's a slicker way to define this map based solely on categorial considerations.

So: does this "extension homomorphism" satisfy a universal property?

(I've thought vaguely about this question for a little while but didn't hit upon anything; hints or full explanations would be much appreciated.) 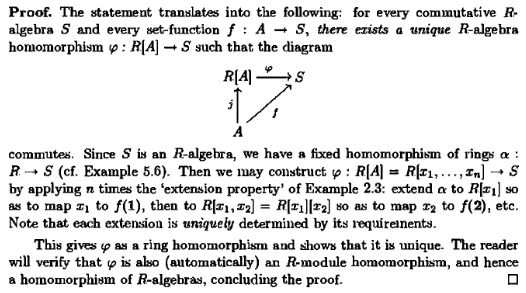 Not the answer you're looking for? Browse other questions tagged commutative-algebra ring-theory category-theory or ask your own question.

4
Showing a commutative ring with field subring has a unique ring homomorphism on polynomials
1
Proving the “extension property” for polynomial rings
23
Why does polynomial factorization generalize to matrices
3
Questions about the proof used in demonstrating the existence of a field extension
3
Surjective homomorphism from $k[x,y,z]/(xy-z^2) $ onto $ k[y]$
2
Polynomial with natural coefficients at irrational points

10
Universal property of the completion of rings / modules
4
Proving that the forgetful functor $U:\mathbf{Ring}\to\mathbf{Set}$ is representable.
1
A quick question on the subring generated by a finite set
2
Universal Property of $M[x]$, where $M$ is an $R$-module.
2
Uniqueness of homomorphism in universal property of localisation
8
functor $\texttt{Nil}: Ring \longrightarrow Set$ is not representable
2
Why is the unique ring homomorphism $\mathbb Z[x] \to S$, where $x \mapsto s$, irrelevant of $S$ being commutative?
1
Polynomial Rings “Most Efficient” Ring?