How to draw this particular rectangle?

BTW: the ruler can't measure anything.

Here is the figure when drawn: 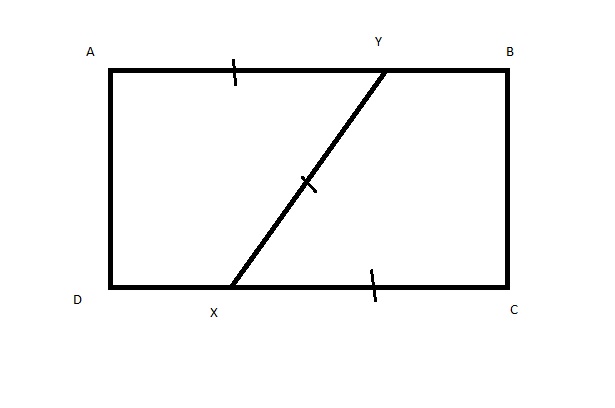 The line will pass through the center $M$ of the rectangle, and one will have $|AY|=2|YM|$.

Here is the picture; it shows that for the considered rectangle there are two solutions:

Now all you have to do is turn this formula into a ruler-and-compass construction. Here is one possible such construction: 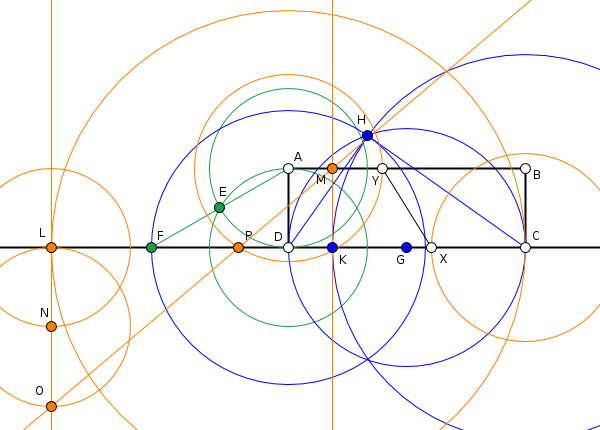 The blue construction uses that length as $\lvert D,H\rvert$, which is one of the legs of a right triangle $\triangle DCH$. The hypothenuse is $a$. The point $G$ is the center of $CD$, its construction by ruler and compasses is not included in the figure. It serves as the center of the circumcircle of the right triangle, by Thales' theorem. The resulting second leg $CH$ has length $\sqrt{a^2-3b^2}$ by the Pythagorean theorem. The length $CK$ is the same, obtained by a circle around $C$.

The orange construction complete the process. $L$ was obtained from a circle around $D$ through $C$, so it satisfies $\lvert L,C\rvert=2a$ and therefore $\lvert L,K\rvert=2a-\sqrt{a^2-3b^2}$. $M$ was chosen an arbitrary distance above $K$, while $O$ is twice that distance below. I didn't include the construction of the vertical lines parallel to $BC$. The resulting $\lvert K,P\rvert=x$ is the needed distance. It can be used as the radius of a circle around $A$ and another around $C$, which defines $Y$ resp. $X$.

Note that I chose to subtract the square root instead of adding it, but the other solution would have been equally valid. Also note that this is not the shortest construction giving the desired result, far from it. If you work out the hint Christain wrote (which is a lot easier now that he expanded his answer), you can obtain a shorter construction like the one depicted below. The orange steps used above might still be useful, though, to do a division of a line into three parts of equal length. 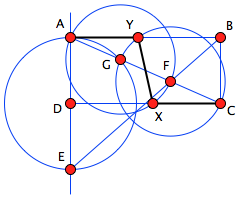 The benefit of the first approach is that it exhibits some general ideas of how you can turn an algebraic result back into geometry. You can try this even if you didn't think of the ideas neccessary for the shorter construction.

18
Can you prove why consecutive diagonal intersection points show decreasing fractions inside a rectangle?
2
Draw a regular hexagon in simcity
1
Measuring interval in pseudo-Euclidean space
1
Semicircle Hanging Out of a Rectangle
0
A rectangle with a triangle
0
Find the measure of $DME$
0
Numberically compute intersection of infinite line and rectangle
1
Is it possible to construct the angle bisector of two lines with only a right-angled ruler?