What is the square root of complex number i?

Square root of number -1 defined as i, then what is the square root of complex number i?, I would say it should be j as logic suggests but it's not defined in quaternion theory in that way, am I wrong?

Unfortunately, this cannot be answered definitively. In fact, every non-zero complex number has two distinct square roots, because $-1\ne1,$ but $(-1)^2=1^2.$ When we are discussing real numbers with real square roots, we tend to choose the nonnegative value as "the" default square root, but there is no natural and convenient way to do this when we get outside the real numbers.

I discuss in my answer here that $i$ is defined as one of two possible numbers in the complex plane whose square is $-1$ (it doesn't actually matter which, as far as the overall structure of the complex numbers is concerned). Once we've chosen our $i,$ though, we have fixed which "version" of the complex numbers we're talking about. We could then pick a canonical square root of $i$ (and call it $j$), but there's really no point. Once we've picked our number $i,$ we have an algebraically closed field, meaning (incredibly loosely) that we have all the numbers we could want already there, so we can't (or at least don't need to) add more, and there's no particular need to give any others of them special names.

If numbers were discovered in the correct order, and in the correct way, then you would see why $i$ is what it is, because it naturally comes out of arithmetics. Here's how you can discover $i$ yourself, already with its proper geometric interpretation:

What is the answer to the following geometric progression?:

The obvious answer is: Just do nothing. Let $x = 1$ (the number $1$ is the number which doesn't change any other number when multiplied with it; it is a multiplicative identity). Let's check: Substitute $1$ as $x$, and you'll get:

But there's one more answer to this puzzle: You can turn your unit by $180°$, making it to operate in the opposite direction. That is, the other answer is $x = -1$, which is the opposite of $1$. Let's check:

In the same way, you can discover $i$, the imaginary unit. Just ask yourself the following question: What is the geometric mean between $1$ (your standard unit) and the newly discovered $-1$? Or in symbols:

But remember that there are always two answers to such geometric progressions. The other one is, in this case, the opposite of $i$, that is, $-1$. Let's check:

So you can conclude that:

Now to your original question:

then what is the square root of complex number $i$?

To find out what are the square roots of $i$, you need to do exactly the same thing you did up to this point: You need to find a geometric mean between $1$ and $i$. Or, in symbols: 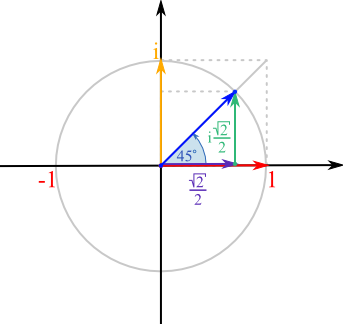 Of course this is not the only answer! Can you find the others? ;) I'll leave it as an exercise for you. Now, when you know how it works, I'm sure you'll be able to find them.

I would say it should be $j$ as logic suggests

WHAT logic suggests that?

but it's not defined in quaternion theory in that way, am I wrong?

Yes, you are wrong. With quaternions you have:

Blurting out whatever definitions you like is always easy. But the real art is to make definitions which make sense and understand what meaning hides behind them.

Generally, as above, we are free to choose the $\rm\color{#c00}{sign}$ of the norm & trace square-roots as we please, e.g. so that the arithmetic is simpler, as in the first case above. This follows from the proof in the linked answer. For many further worked examples see my prior posts on denesting.

I think this would be easier to see by writing $i$ in its polar form,

The answer is that

the square root of $i$ isn't defined.

The thing is that we don't have a universally agreed upon definition of the square root of a complex number.

For more on this, talk a look at the answers to this question: How do I get the square root of a complex number?

Not the answer you're looking for? Browse other questions tagged complex-numbers definition or ask your own question.