Suppose $\alpha: I \rightarrow \mathbb{R}^3$ is a regular curve with unit speed which is also a circular helix. How can we define this carefully in terms of the standard $T,N,B$ frame along the curve ?

I have a few ideas, but I want a second or third opinion. This is to help with a particular homework problem I'm working through in Barrett O'Neill's Elementary Differential Geometry text. A different definition in terms of curvature and torsion is given. I'm not interested in that definition as the whole point of the problem is to show the constant curvature and torsion imply circularity of the given helix.

Thanks in advance for your help, I hope check this in a couple hours.

Following the carifying comments above, let's go with the second definition. The idea there is that the curve's a circular helix if there's an axis ($P + td$) such that the projection of the curve onto the plane perpendicular to the axis traverses a circle of radius $A$ with speed $AB$ in that plane. That seems to capture circular helix-ness.

Now suppose you have a curve with constant curvature and torsion. To prove it matches the definition, you need to come up with the axis and the constants $A$ and $B$. Well, if you think of a model circular helix around the $z$-axis, say, the normal vector always lies in the $xy$-plane. So you could "discover" the axis by taking any two nearby normals and computing their cross-product. Of course, the more nearby they are, the shorter the cross-product vector will be, so to get a nice unit vector for defining the axis, I'm implicitly suggesting that you say this:

Going back to the model of a circular helix around the $z$-axis, you should be able to infer the radius of the circle from the constant curvature and torsion. (Should be 1/curvature, I believe, but I'd have to check whether torsion somehow sneaks in there). That lets you pick a point $P$ at which to start the axis:

Since you didn't ask for a complete proof, but instead for a definition of circular helix that would allow you to prove that constant-curvature-and-torsion curves were indeed circular helices, I think I've given you what you asked for. I can fill in details if necessary, but that might take away the fun from you.

Following comments and discussion Here's a more complete answer that depends only on the curve $\alpha$, and its Frenet frame. Since comments reveal that you're teaching (or taught) a DG course, I'll let you do the computations here, and just post the main results.

So for such helical curves, we have

Then direct computation shows that

I want to go out on a limb here, and make some observations for which I don't have proofs, but which seem likely to be true, and seem more like what James was looking for.

Go back to the "standard helix" I defined in the first answer (which I'll now call $\alpha$). Suppose at each "time" $s$, you look at the frame $T(s), N(s), B(s)$ at the origin. What are the coordinates of $\alpha(s)$ in this (ever changing) affine coordinate frame? [Credit to Tom Banchoff for teaching me to ask this question!]

Second, the $B$ and $T$ coordinates are linear functions of $s$, with the ratio of slopes being $\tau:\kappa$, where $\tau$ and $\kappa$ are the torsion and curvature of the curve $\alpha$, of course.

I suspect (and will perhaps try to prove) that if for an arclength-paramaterized curve $\alpha$, there is a point $P$ amd constants $c_1, c_2, c_3$ such that

From the proof given above, in my earlier answer, we can therefore conclude that the curve is a circular helix.

The conjecture above characterizing helical curves is correct, so a curve $\alpha$ is a circular helix if and only iff there's a point $P$ ad constants $c_1, c_2, c_3$ such that

Thanks for pressing for a purely-Frenet-like characterization of helices -- this was a lot of fun.

Show the constant curvature and torsion imply circularity of the given helix solution".

Even among geodesics on surfaces of revolution there are many choices, circular helices are not the only solution. They are given as examples because they are the easiest to model as one principal curvature is zero and also perhaps as a well known example in everyday life.

A great circle on a sphere has constant (zero) (geodesic) torsion and constant (normal) curvature.

EDIT2: I have placed the words (geodesic) and ( normal) in parentheses because we are talking about two things at the same time.

The Frenet-Serret frame you refer to is meant for stand alone curves in space without regard to the surface on which the curve sits. The same space curve can be made to sit on many surfaces by adjusting/choosing any normal curvature and any geodesic torsion arising from Mohr's circle of curvature. The circular helix you gave as an example is one choice among them where normal curvature and torsion are both constant. I hope I could make myself clear. 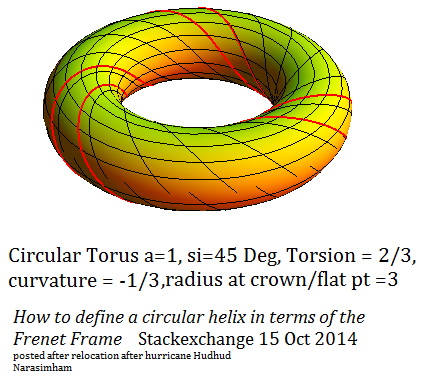 Not the answer you're looking for? Browse other questions tagged differential-geometry frenet-frame or ask your own question.

2
Exact definition of a circular helix

2
determine the principal curvatures of the surface defined as the tube around a space curve using the Frenet Serret frame.
0
Show that a curve has constant curvature and constant torsion.
0
Given a helix, consider the curve of it's tangent. Express the curvature and torsion of such a curve.
3
Curve with constant torsion and curvature is a circular helix.
2
Representing a unit speed curve on a sphere in terms of its Frenet Frame
1
Generalized helix curve
1
Frenet frame of a curve on the surface of a torus
0
Frenet Frame along a curve and Riemannian Curvature on $S^2$