After solving this problem from SPOJ (count the ways to fill a 4xn board with 2x1 dominoes) I found a different solution while searching on internet.

I don't fully understand how someone gets that kind of relation (I don't know almost anything of combinatorics or recurrence relations) but I think I understand something. The $f(n-1)$ term comes from observing that there is an unique way to fill the last column and the $5f(n-2)$ term comes from observing there are 5 different ways to fill the last two columns.

But i don't get where the terms $f(n-3)-f(n-4)$ come from. So I have two questions, the first one is where these terms come from and second I'd like to ask you for a reference to learn combinatorics and recurrence relations.

May you help me? Thanks in advance.

Where mask' is taken from the set of all valid masks from where mask could transition to, also i=n means the first column outside the board as I considered 0-indexing. The code for that is here (this is not actually mine, it's from a mate but it's the exactly same idea).

There are eight ways in which a $4\times n$ tiling can begin, shown and named in the picture below. We'll count the number with each kind of beginning configuration and add the results up to get $f(n)$. 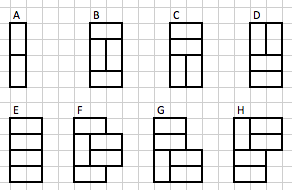 Tilings with starting configurations F, G, and H are a little harder to count. First define some helpful notation.

Now on to the counting. We'll look at type F first.

I'll let someone else suggest good references for learning these techniques and just say experience helps. The hundredth one is a lot quicker to figure out than the first one!

I am not sure I can intuitively explain this recursive formula by itself (and don't think there is an easy explanation without going into numerous cases), but I wanted to give you a general approach that allows to derive such recursive expressions for any tiling problem $m\times n$.

First, I wanted to consider a slightly different problem: how many "connected" tilings on $m\times n$. By "connected" I mean the ones so that every two consecutive columns are connected by at least one tile. Let's call us this function $g(n)$.

We want to consider $g(n)$ mainly for two reasons:

Let's look at how it works for different smaller values of $m$.

Let's split the tilings on N into 5 subtilings: 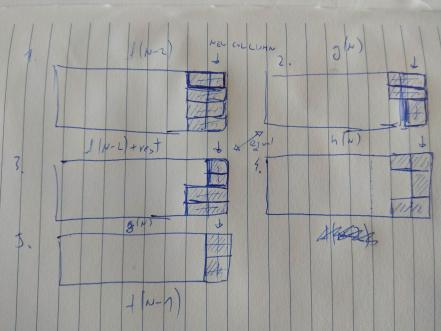 These are all possible board endings. Each tiling belongs to one and only one of these endings.

For type 2 (and 3) the following recursive relation holds:

P.S. Big thanks to @Sudix for simplifying the system of 3 equations on the referenced question. :)

0
number of ways in which the board can be restored to a winning configuration
2
The number of ways to chose $k$ children from a circle with $2n$ children
1
Number of ways to fill the table
3
Counting problem: Checking 9 squares out of $3\times 5$ board
1
How many different ways to fill a nonnegative integer matrix with fixed column and row sums
3
What is a combinatorial proof for the Fibonacci identity $F^2_{n+1} - F^2_{n-1} = F_{2n}$?