Question about Axler's proof that every linear operator has an eigenvalue

I am puzzled by Sheldon Axler's proof that every linear operator on a finite dimensional complex vector space has an eigenvalue (theorem 5.10 in "Linear Algebra Done Right"). In particular, it's his maneuver in the last set of displayed equations where he substitutes the linear operator $T$ for the complex variable $z$. See below. 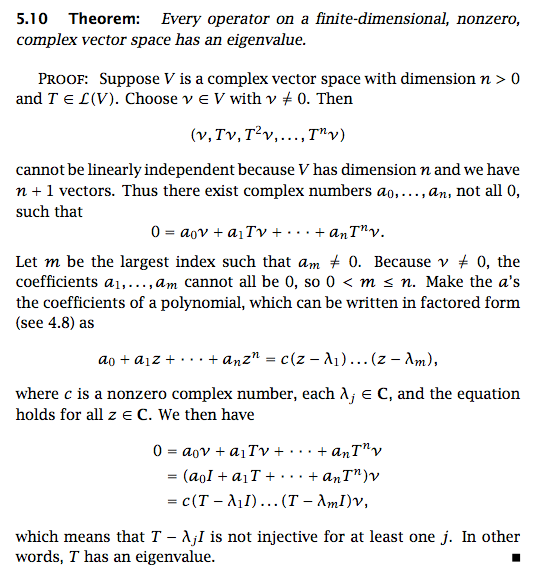 What principle allows Axler to make this substitution of linear operator for complex variable and still claim that the RHS equals the LHS, and that the LHS goes from being the number zero (in the preceding set of equations) to the zero vector (in the final set of equations)?

As a possible answer to my own question, on the preceding page he offers these remarks:

Is linearity of the map from "polynomial over complex variable" to "polynomial over T" the property that makes this work? If so, I don't feel very enlightened. Any further insight here is greatly appreciated, especially since Axler makes a side comment that this proof is much clearer than the usual proof via the determinant.

The essential point here is not just linearity, but also compatibility with multiplication.

By induction, this can be extended to products of an arbitrary finite number of polynomials.

You are right that there is more going on here that just linearity. The principle used here is that for any linear operator $T$ on a space $V$ over a field $K$, the map $\eta_T:\def\End{\operatorname{End}}K[X]\to\End(E)$ given by $\sum_ic_iX^i\mapsto\sum_ic_iT^i$ (substitution of the operator $T$ for the indeterminate $X$, or "evaluation in $T$") is a morphism of rings: not only is it $K$-linear, but it also respects multiplication: $\eta_T(PQ)=\eta_T(P)\circ\eta_T(Q)$. To check the validity of this is a fairly formal matter: the way the product $PQ$ of polynomials is computed just uses rearranging/combining of powers of $X$ and scalars, and the same operations are valid when $X$ is systematically replaced by$~T$. Note that one particular instance is the commutation of scalars and powers: $aX^ibY^j=abX^iY^j=abX^{i+j}$, and the corresponding equality $aT^ibT^j=abT^{i+j}$ is valid because $T$ commutes with scalar multiplication, which is because it is a linear operator. Note that if one would try to do the same thing for a non linear operator in place of $T$, then the resulting map $K[X]\to E^E$ (we no longer get an endomorphism as result, but still a map $E\to E$, and the set of all such maps is still a $K$ vector space) would still be $K$-linear, but would fail to respect multiplication.

In this situation not only $p$ has some root that is an eigenvalue of $T'$ and therefore of $T$ (assuming one works over the complex numbers), but every root of$~p$ is an eigenvalue (this is true over arbitrary fields, though of course only over algebraically closed fields one knows the existence of such roots). Here's why: if $\lambda$ is a root of$~p$ one can factor by $X-\lambda$ and write $p=(X-\lambda)q$, where $\deg q=\deg p-1$ so that for degree reasons mentioned above $q[T']\neq0$. Now $0=p[T']=(T'-\lambda I)\circ q[T']$, and every vector in the (nonzero) image of $q[T']$ is an eigenvector of$~T'$ for the eigenvalue$~\lambda$, in other words an eigenvector of$~T$ for$~\lambda$ lying in the subspace$~V'$.

He doesn't claim that, and you're right, they are different equations and different zeros.

Not the answer you're looking for? Browse other questions tagged linear-algebra abstract-algebra polynomials eigenvalues-eigenvectors determinant or ask your own question.