A functor sending monads to monads

The following apparently simple exercise is driving me mad.

I am sure there is a smart way to do these computations, but I'm not able to find it. A dry and conceptual argument to solve this problem is welcome, but in the end I'd rather see an explicit computation, or a clever way to sistematically avoid such boring checks.

We have a canonical morphism $\alpha : SF \to FT$ such that

is commutative (one checks existence using the universal property of $S(d)$). Then $\overline{\mu} : SS \to S$ is a morphism. We claim that $\overline{\mu}$ is associative. Look at the following huge diagram: 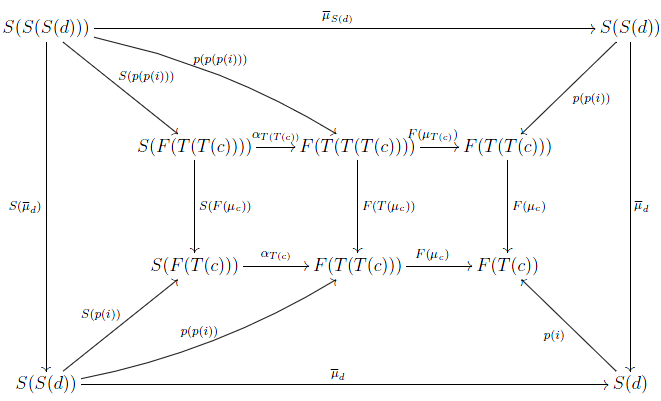 Since $(S(d) \xrightarrow{p(i)} F(T(c)))_i$ is a limit cone, a diagram chase shows that also the outer rectangle commutes. But this says that $\overline{\mu}$ is associative.

The functor you are considering is a lax monoidal functor between the (strict) monoidal categories $[\mathbf C, \mathbf C]$ and $[\mathbf D,\mathbf D]$ (proving that is not difficult but is extremely tedious, it's just proving that some equations holds).

I've already written elsewhere the computations (or at least a good part of that). If you're interested you can find in this link and this link. Unfortunately they are in italian, but I don't think it would really worth rewrite them here.

1
Can every monad give rise to a monad transformer?

3
Do free monads on $Set^I$ (functor category) always exist?
2
Category of fractions: transitivity and cancellation property
9
A few questions concerning “universal colimits” and dense generating sets
4
Uniqueness of the Comparison Functor
3
Lax cones for a monad
0
What are these canonical isomorphisms in 'Algebraic Spaces and Stacks' by Olsson?
1
Do monads and comonads with the same functor always compose?