Group presentations: What's in the kernel of $\phi$?

I have a question about group presentations (in terms of generators and relations). It's been really bugging me for ages. Would really appreciate any thoughts on this. Cheers, Michael

To define my group $G$, I could therefore state what the generators are, and also a set of generating elements of $\ker\phi$. So the question now is this:

I know how to prove that $\ker\phi=N$ for specific examples. For example, I attach below a proof for $G=D_4$. However I can't construct a general proof to understand properly why this works for any group. It makes intuitive sense, but that never satisfies! 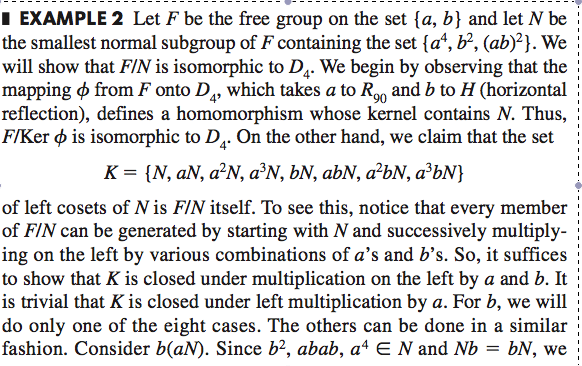 We know a priori that $G$ is a group, and we got a presentation by enumerating its elements and taking a multiplication table. We call the normal subgroup generated by the multiplication table relations $N$. We call this presentation $\phi: F \to G$; you agree that $\phi$ is surjective and that its kernel contains $N$ and you complain that its kernel may be larger than $N$.

Not the answer you're looking for? Browse other questions tagged group-theory group-presentation or ask your own question.

2
Group presentations - again
1
Does every group have a representation?

2
Group presentations - again
5
Prove that the kernel of a group homomorphism $\phi$ is a subgroup and that $\phi$ is injective
2
Show normal subgroup $N$ is a subset of $\ker\phi$ if $\psi$ is well-defined
1
What's the significance of the union of all non-identity centralizers in a group?
2
Finding the kernel of $\phi$ of applying the First Isomorphism Theorem
4
Group Presentations and Cayley graphs
1
Presentations of subgroups
1
How to mention about group words when you haven't said about free groups and show regarding a marginal set computation
0
Transitivity of normalness - a finite extension and a free extension?