I need to write a piece of software that analyzes packet switched computer networks and calculates certain characteristics based on packet loss (the application is Voice over IP quality monitoring). One approach is to use the following $4$-state Markov model (as described here): 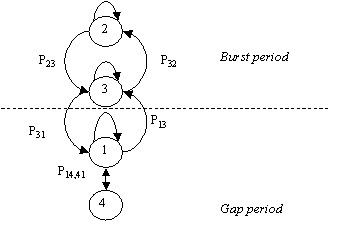 State transitions are bound to certain criteria. This is how it is expected to work for a stream of network packets:

However, for the actual analysis I need to calculate the state transition probabilities from these counters. This is where the algorithm chokes. Besides the issue with zero divisions, I don't see the total number of packets incorporated into the probability calculation (this is from the pseudo code of the algorithm definition, $p_14$ is not included because they added $c_14$ to $c_11$):

I hope you understand why I asked this here instead of on Stackoverflow: this is basically just about the calculation of the probabilities, the rest was provided for context.

There is one important rule for assigning probabilities to edges in a Markov model:

I'm sure you can do the math for other nodes as well.

Not the answer you're looking for? Browse other questions tagged probability algorithms or ask your own question.