I have 8 questions on this Yahoo Answer. I know

You need to simply find two (distinct) elements of order 2.

As per p. 61 Theorem 6.6 in the aforementioned Fraleigh textbook, any subgroup of a cyclic group is cyclic.
Hence by reason of my question 4 above] the sum of these 2 distinct elements will also have order 2.

If you want a more "advanced" explanation of this, what's neat is that you have this:

Now notice the axioms of a finite projective plane of order 7:

But a finite projective geometry of order 7 has 7 lines. That's the number of lines (subgroups) we already found by the "boring" method. But this is much cooler! Here is a diagram of this geometry: 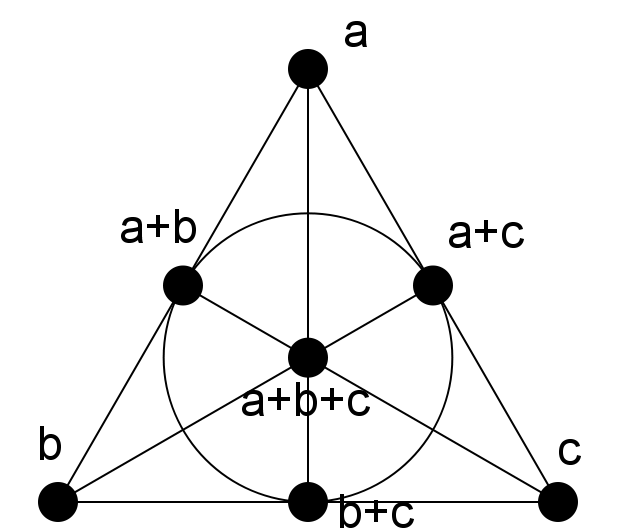 It is called the "Fano plane." I have labeled the points with their corresponding elements in your group. Notice how the three lines of the first type are the sides of the triangle, the three of the last type go from vertex to midpoint, and the "exceptional" line is actually a "circle" in shape (here "line" doesn't mean "straight line") through the three midpoints.

I got an email from the asker, asking for clarification... First, we can ignore the elements of order 4.

We are looking at the subgroup of Z2 x Z2 x Z4 which consists of elements of order 2. Because the group is [A]belian, this is a legitimate subgroup. Call it H.

Then the set ${a,b,c}$ is a generating set of H. Further, H has order 8. It has 7 nonzero elements, and they will all be order 2 by definition. All Klein groups are subgroups of H, obviously.

Then you just use the above logic to figure out how many subgroups of $H$ there are. The above logic tells us how. You ask why you can't have $a,b,c$ all in the same Klein group, but ${a,b,c}$ generates $H$, so if they are in the same subgroup, that subgroup is too big to be a Klein group.

The fact that $H$ forms a projective geometry is awesome, but if you are having trouble grasping the basic definitions, you can ignore that for now...

The Klein $4$-group consists of three elements of order $2$ and the identity, and it is up to isomorphism the only group with these properties. As the sentence quoted below your question explains, once you've chosen two such elements, you get the third as sum of the two you've chosen. It is not hard to show that for any two order-$2$ elements $x$ and $y$, the set $\{0,x,y,x+y\}$ indeed is a subgroup isomorphic to the Klein $4$-group, and of course any such group has to be of that form.

Note that those subgroups are disjoint in the sense that for any two of them, the only element shared is the neutral element. Moreover, each elements of the product group can be written uniquely as product whose factors are one element from each of those subgroups.

That's a misunderstanding. The sentence doesn't say “we will sort these” but “we will sort these out”. To sort out doesn't mean to sort them, but rather to select them on some criterion. In this case, based on the criterion on how many of those listed elements are in the subgroup.

Note also that this is not a need, but a way to simplify your work while making sure you don't miss any case. In principle you could manually check every single of the $35$ different sets of three order-two elements whether together with the identity they form a subgroup. But that's a lot of tedious work, and therefore it makes sense to save work by classifying the subgroups in a way so that the groups in each class can be handled in an uniform manner. And it turns out that classifying by the number of “basic elements” is a useful criterion for that.

Because those are the only two elements that remain after excluding the others.

All elements of the product group are made of one element each of the factors. Now the order of such an element of the product is the least common multiple of the individual group element orders.

This answer addresses the question in the title, not the many all along the post.

Any candidate subgroup of $G$, say $K$, isomorphic to the Klein group must be made of:

Therefore, the number of (distinct) subgroups of $G$ isomorphic to $\mathbb{Z}_2\times\mathbb{Z}_2$ is:

Explicitly, according to the labelling $(1)$:

Not the answer you're looking for? Browse other questions tagged group-theory solution-verification cyclic-groups or ask your own question.