I've read the proof for why $\int_0^\infty P(X >x)dx=E[X]$ for nonnegative random variables (located here) and understand its mechanics, but I'm having trouble understanding the intuition behind this formula or why it should be the case at all. Does anyone have any insight on this? I bet I'm missing something obvious.

The continuous case is analogous.

In general, switching the order of summation (as in the proof the OP links to) can always be interpreted as adding row-by-row vs. column-by-column.

A hint and a proof.

Thus, for a non-negative random variable, $E[X]$ can be interpreted as the area of the region lying above its CDF $F(x)$ and below the line at height 1 to the right of the origin. The standard formula $$E[X] = \int_0^\infty x\mathrm dF(x)$$ can be thought of as computing this area by dividing it into thin horizontal strips of length $x$ and height $dF(x)$, while $$\int_0^\infty P\{X > x\}\mathrm dx = \int_0^\infty [1 - F(x)]\mathrm dx$$ (in the Riemann integral sense) can be thought of as computing the area by dividing it into thin vertical strips.

Perhaps by considering this question with a concrete physical example, it will provide some intuition. 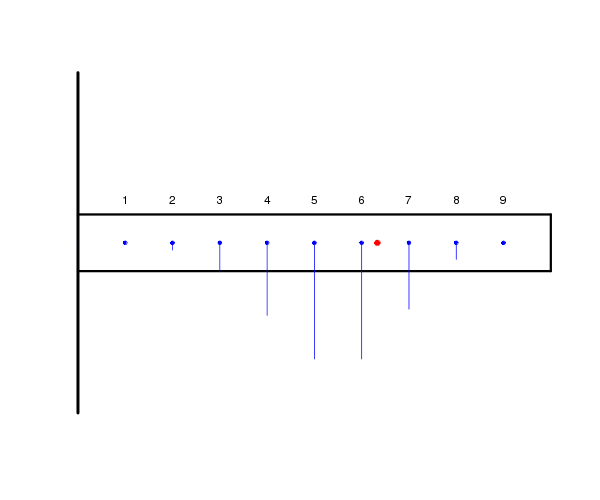 In a probabilistic setting, our weights correspond to probabilities and $c = \mathbb E X$ where $X$ takes on the values $1,2,\ldots,9$ with probabilities $w_1,w_2,\ldots,w_9$, respectively.

In terms of the beam, we can think of the expression $\sum_{n=0}^9 \mathbb P(X > n)$ in the following way. Standing at zero, look out to the right and count up all the weights in front of you. Now, move one step to the right and repeat this process, adding the result to your initial sum. Continue this process until you get out to position 9, at which point there are no more weights in front of you.

The resulting sum is the center of mass, or, in probabilistic terms, the expectation $\mathbb E X$.

Extending this intuition to discrete random variables taking on non-integer values is straightforward. The extension to continuous variables is also not difficult.

Not the answer you're looking for? Browse other questions tagged probability statistics expected-value or ask your own question.

3
Why does $\mathbb{E}[X] = \sum^\infty_{r=0}\mathbb{P}(X > r)$?
0
How to prove the folowing theorem in probablity?
0
Intuition behind expression for expected value in terms of CDF
0
Intuition behind expected value formula?
0
Different representation of a Lebesgue integral
41
Explain why $E(X) = \int_0^\infty (1-F_X (t)) \, dt$ for every nonnegative random variable $X$
5
Find the Mean for Non-Negative Integer-Valued Random Variable
5
Expected value of the minimum of a non-negative random variable and a constant
6
Darth Vader Rule: what is the reason for its name, and a formal proof?
3
Expectation and variance of $Y=\max(X_1,\ldots,X_n)$, where $X$ is uniformly distributed.
see more linked questions…

0
intuition behind convolution of sum of two densities
1
How to find the estimator using random variables in statistics
0
Why is the co-variance multiplied by two when summing the variances of two correlated random variables?
1
Indicator Random Variables, Expectation, Covariance
3
Linearity of expectation
0
Maximum Likelihood parameter $\theta$
0
Conditional expectation of an unbiased and sufficent statistic
0
Intuition Between Product Moment of 2 Random Variables
0
Intuition Behind Function of a Random Variable