Why is it called an “orthocenter”? What is the orthocircle?

We know that the orthocenter of a triangle is the place where the triangle's three altitudes intersect. But why is it called that?

The *in*center - the intersection of the triangle's three angle bisectors - is the center of the *in*scribed circle.

The *circum*center - the intersection of the triangle's three perpendicular bisectors - is the center of the *circum*scribed circle.

But what is an "orthocircle" (if such exists)?

This document says that two circles could be orthogonal. Well gee, whiz!

This one says an orthocircle has the given center and is orthogonal to the given circle. That doesn't help, because I can make an orthogonal circle to the triangle from many points (maybe even all of them).

And according to Wolframalpha, the name "orthocenter" was invented by people named Besant and Ferrers. But that page doesn't indicate why how came up with it.

And that is literally everything I could find on the word "orthocircle" or on "why is it called orthocenter?".

So why is it called "orthocenter"? And what is the "orthocircle"?

P.S. And how do I italicize part of a word?

Ortho means "straight, right". Orthocenter, because it is the intersection of the lines passing through the vertices and forming right-angles with the opposite sides.

There are many circumferences associated to the orthocenter. I don't think (or better said I haven't heard of) any of them called orthocircle. 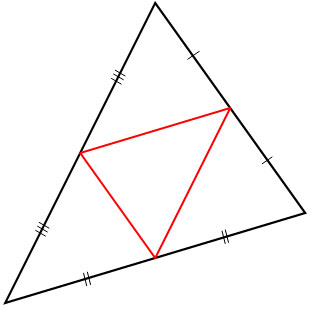 Equivalently the original triangle has vertices at the midpoints of the sides of the anticomplementary triangle. Maybe this could be called the orthocircle. 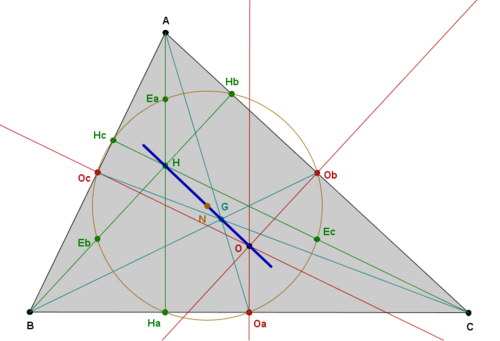 In the picture above, $H$ is the orthocenter, $O$ is the circumcenter, and $G$ is the center of the nine-point circle, which is halfway between $H$ and $O$.

3
Showing point is the orthocenter
17
What is so special about triangles?!
1
Finding functions in Inscribed Triangle
3
Prove that the intersection point of lines $AK$ and $CL$ lies on the line $BO$
2
Orthocenter and midpoint proof
1
Circum-centre of triangle formed by external bisectors of base angles of a given triangle is collinear with the other vertices of the two triangles.
0
proof that triangle have only one particular circumscribed circle
1
Altitude lines dont appear to be perpendicular to triangle sides in botched orthocenter calculation attempt